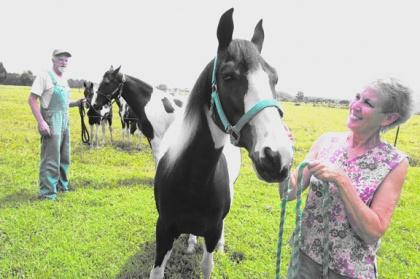 Jerry Higgins was practically born on a horse. His wife, the former Janice Jernigan, wished she had been but didn't saddle up until she met Jerry. That was 48 years ago.

Today, their combined knowledge of the equine history of Cannon County, specifically the Spotted Saddle Horses, totals almost a century's worth of horse sense.

Charter members of the Spotted Saddle Horse Breeders & Exhibitors Association (S.S.H.B.E.A.), the two are in the organization's hall of fame, and Janice has served as secretary on the board of directors since 1987.
Living in the Woodland community, the couple refers to their farm as Higgins Zoo where they own 11 Spotted Saddle Horses, a spotted jack and two spotted mules. They also raise Boston terriers and Walker coonhounds along with a backyard full of chickens.

But it's the Spotted Horses of which they are most passionate.

"They're tough, athletic, pretty and flashy," says Janice, who ought to know. She's ridden them in more events than she can count. "I like showing them and trail riding. If there's a show or trial ride, I'm going if I can find somebody to ride with."

As for Jerry, when he starts talking about Spotted Saddle Horses, he can picture them in his mind's eye as he begins to spout dozens of names of horses as well an many of the men in Cannon County who were equine enthusiasts going back seven or eight decades. He seems to be a walking history of famous local horseflesh.

"I had a Spotted Horse or was fooling with them before I got out of school in '64," said Jerry, who grew up on a 100-acre hillside farm in Higgins Hollow off of Highway 53 between Woodbury and Gassaway.

"My father [Dave] rode in the first Memorial Day Trail Ride on May 30, 1939. We've rode these horses [the Spotteds] all over the county pretty much. I lived in the hollow, about five miles from the top of Short Mountain."

To the best of his recollection, some of the early participants in those annual Cannon County trail rides were Bill Smith, Doug McCrary, Frank Adams, Alf Mason, Hubert Logan, Pap Mitchell and Dave Higgins.

Today, the Cannon County Walking Horse Association continues the longstanding tradition of annual trail rides on Memorial Day and Labor Day weekends as they mosey along from Woodbury to their campground on Pea Ridge near Short Mountain. Their Labor Day ride starts Saturday (Aug. 31) at 11 a.m. at the Woodbury fairground.
As for the popularity of the Spotted Saddle Horse, of which scores can be seen in pastures as you drive the local highways, Jerry says, "A lot of it's appearance, and they're good trail horses, a little more tougher and prettier looking than others. They're gaited horses."

While he remembers a few Spotted Saddle Horses in the county back in the 1940s, he believes the breed gained enthusiasm in the mid-to-late 1970s, and he claims it goes back to the late, superlative Fireball.

"He was just a great saddle horse and wood horse and cow horse, kind of an all-round horse, and a breeding horse. He had plenty of stamina. He was one of the greatest Spotted Horses," said Jerry.

His late brother, J.W. Higgins, was one of several local men who owned Fireball, who sired hundreds of horses in the county. J.W. also owned Slippin Slick, who with Fireball, are considered by many to be among the foundation of the breed.

"They were just big old pretty spotted horses that saddled until these guys in the 1970s decided 'We need to start an organization to register and get a pedigree.' That's when it really took off," said Benny Lance, president of the Cannon County Walking Horse Association. "By having this registration, you could finally trace the family tree back to beginning.

"The Tennessee Walking Horse was a big influence on Spotted Ponies. They started to crossing them to improve the breed, and Tennessee Walking Horses seemed the best to cross with as they had the size and the beauty of gait. We tried to cross with everything, every breed. Once we got the foundation laid, it become a whole lot easier to get where we are today. Fireball was the big thing in his day, and he passed on a bunch [of offspring]," Lance said.

Born in Lebanon, Fireball was originally owned by Wilson County's Jimmy Oliver. The procession of owners were James Morris Paschal, George Hall, J.W. Higgins, Billy Hale of Gallatin and then he returned to Woodbury and was owned jointly by Ronnie Hall and Jackie Haley.

Growing up, Janice lived with her family on a farm in Bradyville but there were no horses for her to ride.
"Daddy said cows and horses don't mix," she said.

Then she began dating Jerry, joining him and his family and friends for Sunday evening trail rides in the woods and hills surrounding Woodbury. And that's when she fell in love with Spotted Saddle Horses, namely a stallion named Fireball, which J.W. let her ride.

"He was the first horse I ever rode. He was full of fire and wanted to go, and I was young and dumb and not smart enough to be afraid of him. I was just excited to get to ride," recollected Janice.

Jerry's first three mounts were not horses. When he was a lad, his grandpa, Wilburn "Daddy Rabbit" Ashford, made him a wooden rocking goat. Next came a live goat named Bill that he rode until he got too big to ride him. At 10 his form of transportation became a mule.

"I'd ride that mule when I's so little, I had to go to the fence to get on. I didn't have a saddle. I rode on sacks, and the sacks were so slippery, I'd fall off," Jerry said.

At 14 he got Charlie, a horse he recalled as "a roan with stocking legs, spots on its side and spots on its face. I had it four or five months before the horse foundered and died.

"My brother raised me a little mare out of Doug McCrary's Walking Horse. He named it Thunder, and I'd ride her and race her and I outraced everybody in the county. She could outrace a streak of lightning," said Jerry, who worked at the Woodbury shirt factory, General Electric and Samsonite and farmed and plumbed before spending 19 years with the Tennessee Department of Transportation.

As for Spotted Saddle Horses, the way Jerry sees it, Fireball was the cream of the crop.

Jerry raised Firecracker, Tonto and Scout, and the latter was sire to at least four of the first 10 horses registered with the S.S.H.B.E.A. Jerry also raised five world champion Spotted Saddle Horses.

"I've done it all. I've traded everything you can think of from snakeskins, dogs, chickens and guns to cars, trucks and four-wheelers. I've traded lots of registered coonhounds, and we've raised Boston terriers and hens."

Even Janice, who worked at Genesco and Singer before spending 32 years at Arnold Air Force Base, got into the act. "He taught me to barter. I've traded a few horses, dogs and cats," said Janice, who has yet to trade Jerry for a horse.