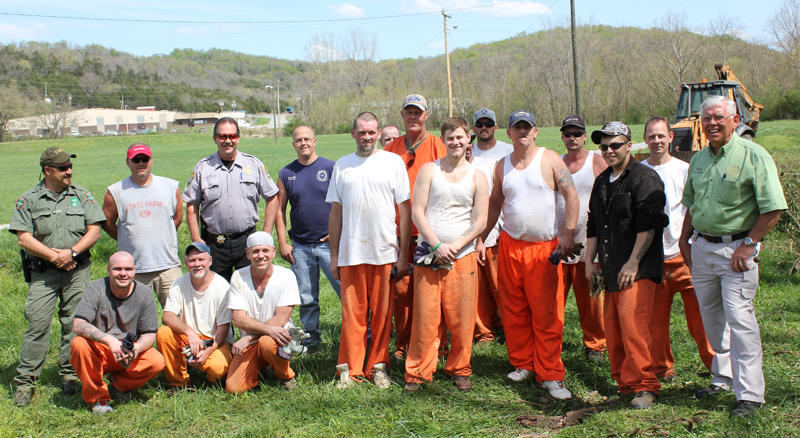 Cannon County Sheriff Darrell Young, far right, recruited volunteers from the jail to help clean the river bank along Dillon Park.
The banks of the Stones River above Doolittle Bridge are being cleaned up -- for fishing.

Mark Vance of the Tennessee Wildlife Resources Agency (TWRA) has a goal. His goal is to clean up the river bank which runs along Dillon Park to allow fishing tournaments for children. Right now Vance says that fisherman cannot get to the bank because of undergrowth.

He wants Cannon County to be able to have a kids fishing tournament like the TWRA has for a lot of kids throughout the state. He picked out the most suitable place for this to happen and it is behind the old jail and Regions Bank and behind the Woodbury Church of Christ.

To do this he needed to have some help so he went to Alan Paschal, Woodbury Public Works Director, and then to Sheriff Darrell Young.

Officer Vance said he told the sheriff of his plan and the Sheriff jumped right on it. Vance said that before the day was over on Monday (March 19) that the sheriff had a whole crew of inmates lined up and over at the Stones River working away.

The job is almost now completed. Vance spent time with work crews showing what plants to take out, especially the Japanese Privet.

The Japanese Privet is not native to Tennessee and wherever it grows it kills out everything else below it. It is usually used as a hedge when groomed right, but in the wild they take over the territory whenever allowed to grow. Vance is making sure that the native plants get a chance to flourish in that habitat.

Vance, through the TWRA, will be putting on a kids fishing tournament down at the river in late spring, probably in early June. This area will be really ready to accommodate the fisherman and will also be a good place to rest relax and maybe have a picnic.

Besides loving the idea of fishing tournaments for the kids Sheriff Young said he was "more concerned about cleaning the river for the safety and security of the walkers that frequent the track down there. As long as we keep it clean everyone can feel safe walking on the track."

The City had two men working there and the County Garage sent their chipper and the sheriff had the muscle which was a good combination for a good cause.

So grab your kids and grab your poles and head down to the banks of the Stones River in downtown Woodbury.

Print
Members Opinions:
katydid
[Delete]
Great job! The river bank looks fantastic.
[Delete]
That area looks awesome. A hearty thank you to all of the hard work the inmates put in and all of those who allowed it to happen!

I have fished my whole life in and around Cannon County. Some of my earliest memories are of me and my father fishing the banks behind the old jail and down at flat rock behind the ball parks.

I had a flat bottom aluminum boat that I used to float behind the Courier, Bank and Church to fish. I have walked it, crawled it and swam the river as a boy every summer growing up!

Those are such great memories and I think it is a wonderful idea to clear the bank and hold a fishing tournament for the kids. If there is anything I can do to help with it then please let me know.

junebug18
[Delete]
Such a great idea. I have an 8 year who can't wait to go fishing! Good job!