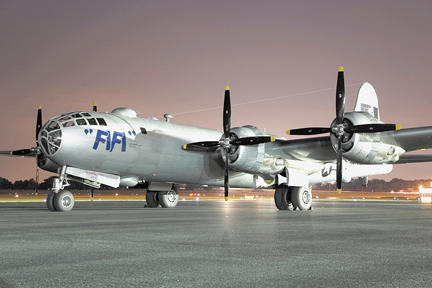 "FiFi" a World War II era bomber is one of the CAF planes.

The Commemorative Air Force (CAF), a nonprofit organization dedicated to refurbishing and preserving historic combat airplanes, is looking for a new national headquarters location and the Smyrna/Rutherford County Airport has made the final list.

The CAF, currently based out of Midland, Texas, began searching for a new headquarters in May 2013, and recently announced the top eight sites selected from over 25 interested and viable locations. The organization was founded to acquire, restore and preserve in flying condition, a complete collection of combat aircraft which were flown by all U.S. military services and selected aircraft of other nations, for the education and enjoyment of present and future generations of Americans.

The CAF National Airbase facility will feature a year-round aviation attraction, house headquarters staff and member-volunteers who will organize and execute an annual warbird airshow and fly-in, and be a base of operations for some of the CAF's most significant flying vintage military aircraft.

"The opportunity of landing this headquarters is tremendous for the airport, Rutherford County and Tennessee," said Smyrna/Rutherford County Airport Executive Director John Black. "The CAF expansion brings with it a significant economic impact in the form of jobs and tourism. We are honored to be among the finalists for this project."

Criteria to be among the top eight included items such as location in a major metropolitan area with a minimum population of one million, ease of access to tourists and CAF members through a nearby major international airport, and infrastructure of interstate highways.

The CAF is expected to decide on its new location by the end of the calendar year.

CAF membership originally included mostly World War II veterans, but has now spread across the nation to a more diverse population. Membership is open to all men and women, age 18 and older, and a cadet program is available for those under 18. All members share an interest in preserving and teaching the history of World War II airpower. To learn more and to become a member to show our local support, visit www.commemorativeairforce.org.