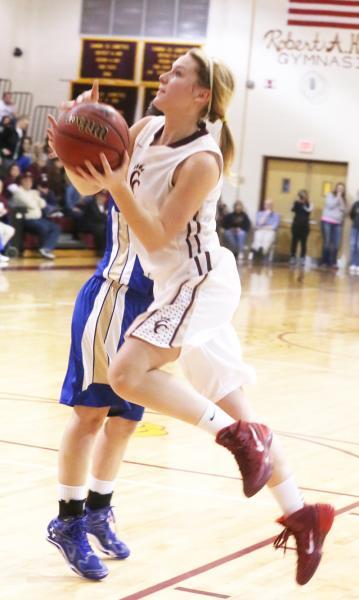 SPARTA - One day after Abbey Sissom was named a Class AA Miss Basketball Finalist – confirming she is one of the best players in the state of Tennessee – she poured in a 46 points to lift No. 3 Cannon County 74-66 triumph against Smith County in the semifinals of the District 8-AA Tournament Saturday in Sparta.

The Lionettes (29-3) will face Livingston Academy in the District 8-AA championship game at White County High School Monday at 7:30 p.m. They have assured themselves a first-round home game in the Region 4-AA Tournament. Cannon County will play host to either Sequatchie County or Signal Mountain Friday at 7 p.m.

Sissom’s 46 points were a career high, besting the 43 she scored against Cookeville in the championship game of the Sun Drop Romp Tournament.

“I hit some shots early and I was feeling good,” Sissom said. “My teammates recognized that and they did a great job of getting me the ball in position to score. I’m just glad our team won and we are playing for a championship. Smith County is a very good team so this was a tough challenge for us.”

Smith County standout poured in 38 points for the Owls but her exceptional night was overshadowed by Sissom.

“That was an outstanding effort by both of those players,” Lionettes Head Coach Michael Dodgen said. “Abbey got it going early and she was as good as it gets. The thing is she did it against a good team in a game that was huge for our team.”

After Hackett hit a basket to cut the deficit to 62-59, Sissom buried a driving layup and followed it with two free throws with 2:34 remaining to push the lead to 66-59. The game remained in Cannon County’s favor; however, Smith County cut the lead to 69-66 with one minute remaining.

Clements and McReynolds combined to hit 4-of-6 free throws in the final 49 seconds to seal the win.