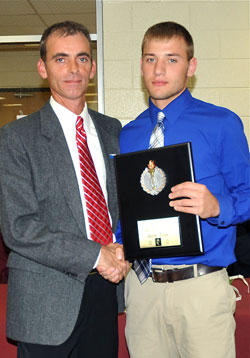 Sissom dominated the basketball scene during her sophomore season. She became a member of the school’s 1,000-point club after averaging 20 points and scoring more than 625 during the 2011-12 campaign.

“It’s an honor to win this award and it is also a surprise,” Sissom said. “I tried to do my best and give everything I had for my team each time I played. I am very appreciative.”

Tobin was a three-sport standout in 2011-12, starring in football, basketball and baseball. He was an all-district football player, a starter on the basketball team and was regarded as one of the top pitchers on the baseball team.

“I am honored to get this award and it is very unexpected,” Tobin said. “It means a lot because I try to put a lot of effort into everything I do in order to help the team succeed so it is nice to be recognized.”

The Cannon Courier announced its Players of the Year in each of Cannon County’s TSSAA-sponsored sports during the banquet.

(The Cannon Courier will publish a special section commemorating all sports winners in June).