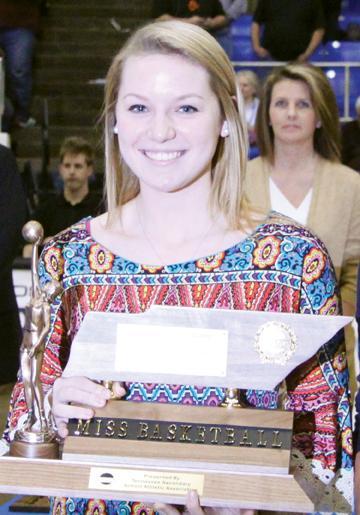 Abbey Sissom capped her Cannon County basketball career with one of the most prestigious individual awards given by the TSSAA she was named Class AA Miss Basketball following the TSSAA Girls State Tournament at MTSU's Murphy Center Saturday (March 8).

Sissom joins former Lionette great Julie Powell as the only Cannon County players to receive the honor.
"It is definitely a great honor," Sissom said following the presentation. "It means a lot to me. Even though I would rather have it a different way and my team be here playing, it still feels good."

A large contingent of family and friends burst into cheers when Sissom, a MTSU signee, was announced as the winner.

Lionettes Head Coach Michael Dodgen said the award was a deserving way for Sissom to end a smashing prep career.

"She has put a good cap on a great career," Dodgen said. "As a coach it is an honor to have coached one of the best in Tennessee. I'm proud of Abbey and what she has been able to accomplish. It is just a great honor for a kid that has worked hard, not only for four years of high school, but also all of the years she has put into getting here."

Here is MTSU, where the presentation took place.

Ironically, it is the close of one chapter on the same court where Sissom will begin her college career.

"It is neat that I will end one career and start the next in the same place," Sissom said. "I'm really excited to be on (the Murphy Center) court next year."

Sissom is a two-time All-State performer and a lock to earn a third straight honor. She concludes her prep career second on the all-time scoring list at Cannon County with 2,606 points. Sissom averaged 24.4 points, 4.4 rebounds, 4.5 assists and 2.7 steals during the regular season. She shot 40 percent from 3-point range and 89 percent from the free-throw line.

She is a four-time All-District 8-AA selection and two-time District Player of the Year. Sissom joins Powell as the only three-time finalists for Miss Basketball. In fact, they are the only Cannon County players to be named finalists.

Sissom said she was proud to win the award and that her teammates shared in it; however, she was equally proud to be on the same stage as the other finalists for a third straight year.

"I am appreciative to the people who voted for me and for my teammates, coaches and fans," Sissom said. "I am thankful to win but with all of the great players out there in AA it is just an honor to be up here with them even if you don't win. To be recognized with (Bell and Hodge) this year is special. They are both great athletes and they are going to have great careers."

A statewide committee of sportswriters selected the winner based on performance during the 2013-14 regular season. Academics and character were also taken into consideration. High school head basketball coaches and members of the media nominated the finalists.