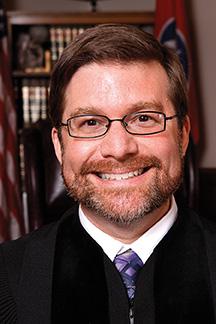 Keith Siskin, Judge of Division III of the Circuit Court for Rutherford and Cannon Counties, has been elected as Presiding Judge of the Sixteenth Judicial District.

Pursuant to T.C.A. § 16-2-509, the Trial Judges of each judicial district elect one member of the Judiciary to serve as Presiding Judge each year. The Presiding Judge is responsible for assigning cases to the other Judges in the district, and for taking any actions necessary to correct any condition adversely affecting the administration of justice in the district. The Sixteenth Judicial District includes Rutherford and Cannon Counties.

Judge Siskin was elected to an eight-year term on the Circuit Court in the August 7, 2014 County General election.

“I am excited about this opportunity to serve the citizens of Rutherford and Cannon Counties in this role,” Siskin said. “I want to thank the voters for electing me to the Court, and I am honored that my fellow Judges have entrusted me with the position of Presiding Judge. I want our courts to be the most open, fair, and efficient courts in the state of Tennessee.”

A native of Savannah, Georgia, Judge Siskin is a graduate of Vanderbilt University and the University of Georgia School of Law, where he served as Editor-in-Chief of the Georgia Journal of International and Comparative Law. Judge Siskin resides in Murfreesboro with his wife, Sheri, and step-daughters, Micah and Shae.

The official website of Circuit Court, Division III can be found at
www.rutherfordcountytn.gov/judgesiskin.