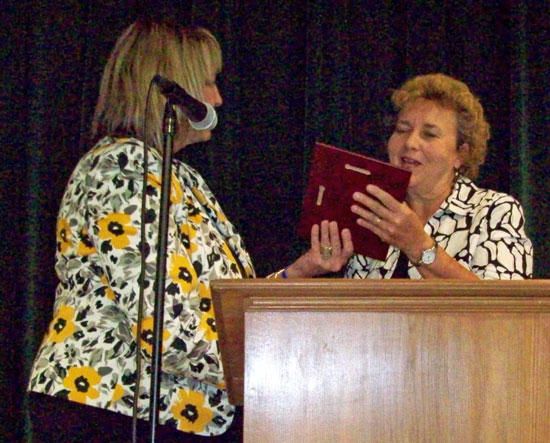 Woodland came in third in the running with 96 percent while Auburn School finished fourth with a 95.94 percentage.  Eastside was not far behind at 95.87 percent.  Woodbury Grammar school claimed sixth with a 94.79%, while Cannon County High School rounded up the schools with a 94.76% attendance rate figure.

The attendance award was announced Thursday night during the Cannon County Board of Education's regular monthly meeting.

The meeting was the last for board member Cathy Hyatt, who did not seek reelection. Bruce Daniel will be taking over her spot starting in September. It was also the last meeting for board member Shannon
Davenport, who lost in an election to Nathan Sanders last Tuesday. Davenport had prior engagements and could not attend the meeting.

Woodbury Grammar School Principal Bonnie Patterson gave a presentation to show how the Cub Club benefited the students involved. The Cub Club was started last school year with the money awarded the school from Verizon Wireless and the Thinkfinity Grant.  The Cub Club focused on 3rd grade reading and 7th grade math.

Although the scores aren't in for the reading portion just yet, the figures showed just how well the program benefited the students in the Math program as on average Students increased their
scores 8 NCE points. One student ended up with an increase of 26 NCE points. Six students increased in one category ranking on their TCAP scores going from basic to proficiency.

Patterson received the Board's approval to apply for another Thinkfinity grant for $5000, a Community
Foundation Grant for up to $10,000 and a grant from Lowe's worth $10,000 in which if awarded will be used for upgrading playground equipment at the school.

In other actions the Board denied the transfer requests from the Monzalvo family and Cassie Faircloth.  They approved Wyatt Goff taking dual enrollment courses at MTSU.

They also approved Daniel McFerrin's request to take dual enrollment courses through the Tennessee Technology Center with the understanding that he will have enough hours to graduate on time.  Since the Center does not start classes until September 4th, the provision was also made that he could not leave school early before that date.  McFerrin plans to study to be a licensed electrician.

The Board approved the Revised General Purpose School Budget which shows a appropriation of 86.5 cents of the county property tax.  This only changes the revenue side and not the expenditures.

The Middle Grade Sports Committee is still meeting so the item on the agenda was tabled. The next meeting of that committee will be August 28th at 5:00 at the Central Office.

After the attendance award presentation and the recognition of Ms. Hyatt and Ms Davenport for their past four years of service on the school board, the meeting was adjourned.

Print
Members Opinions:
fancytenn
[Delete]
Way to go Short Mountain School! It is a great school which makes kids want to get up and be there.
gm
[Delete]
Great job getting all 12 students there , Short Mountain and ALL Cannon Co. schools need to focus on TCAP and ACT scores ! Maybe next time Mrs. Parkers contract is up those statistics are made public , Cannon's scores on TCAP and ACT are well below surrounding county's and have for the most part trended down over the last few years . Everyone speaks of the benefits of small class sizes,nothing to support that with county wide lower test scores.
preacha
[Delete]
Congratulations Mr. Pitts, Faculty and students for a great achievment and setting an example for the county and state.
[Delete]
Cannon County schools scored lower than inner city schools in Memphis, TN. So much for the idea that smaller classrooms make for smarter students.
bteachout
[Delete]
Way to go SMS! I went there K-8. By the way, I am a college graduate. I went to Motlow State Community College and now I am a RN. Some children have difficult times with taking tests. I think people need to be more positve. How does being negative help?
fancytenn
[Delete]
I agree bteachout, we do need to focus on the positive. I think encouraging nearly 170 students ( not 12) to get to school everyday and want to learn says something in itself. As far as small schools, Eastside and Auburntown which have smaller attendance than Short Mountain produced the class of 2012 Valedictorian and Salutaterian. We should all work together as a team, it is not a war between smaller schools vs bigger schools. We ALL are a community.