She pops in and out of jail 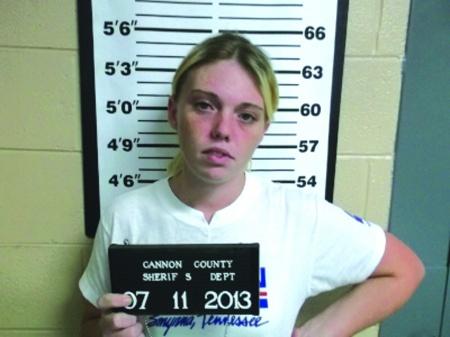 Was it a world's record?

Doubtful, but 21-year-old Stephanie Mooneyham found herself being quickly arrested again just after being released from custody at the Cannon County Jail last Thursday (July 11).

"She had just been released from jail when she stole the property of other prisoners awaiting release," said Investigator Anthony Young.

She was charged with theft over $500 for stealing the property of Phillip Miranda including an iPhone, wallet and belt and with the theft under $500 of a cell phone from Donnie Thomas.

The incident took place in the jail's booking room when a number of prisoners were being readied for release.
A hearing on the theft charges has been set for Sept. 10 in General Sessions Court.

Mooneyham had just been released from custody after serving seven days on other theft charges and appearing before Circuit Judge David Bragg.

During the Circuit Court proceedings, Mooneyham's probation had been reinstated for 11 months and eight days until all conditions of the court had been met. She had been ordered not to use drugs or alcohol and not to associate with people using either.

Bragg had ordered her to pay fines and costs and to submit to random drug/alcohol screenings.
After her arrest, Mooneyham was required to post bond again before she was released from custody.