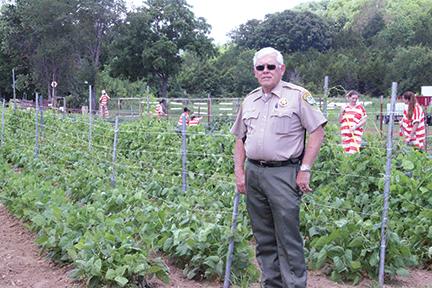 One of the best-kept gardens in Cannon County is located outside the Cannon County jail. Like most gardens, this one yields a large amount of product that proves savory during this time of year.

What makes this garden unique is it is manned by jail inmates and saves Cannon County taxpayers roughly $25-to-$30,000 annually, according to Sheriff Darrell Young.

The concept of the jail garden was developed four years ago when Young was elected sheriff; however, he doesn’t take full credit for the brainchild.

“(Former Sheriff) Bob Stoetzel did this when he was sheriff in the mid-1990s,” Young said. “After that it just faded out.”

Young said he contacted Tennessee Corrections Institute (TCI) to determine the possibility of having a garden in order to grow food the inmates to eat.

“They said we could grow our own garden and eat our own vegetables,” Young said. “We have a commercialized kitchen so we could can or freeze the vegetables. I choose not to can because I don’t want the glass. It is too big of a liability risk.”

Young estimates the garden has saved Cannon County more than $100,000 during his tenure as sheriff. It has also created work ethic and pride amongst the inmates that work it.

“I have been at the jail almost a year, and I’m about to get out,” Tiffany Carpenter said. “This prepares us. We work. I haven’t been lying around this year. I have been working. I have learned a lot since being here. I have learned about stuff I knew nothing about. Now that I know something about growing a garden and working in it, I would like to grow one for myself.”

“Most of the food our inmates eat is produced in our garden,” Young said. “With the inmate population we have it has cut down on our food costs. We have gone over on food this year because of the overpopulation but our garden has kept our food cost down overall.”

When Young became sheriff there was one cooler at the jail and there are now six. Five of those were donated.
Carpenter says getting to work in the garden is a privilege that is not taken lightly.

Much of the seeds and such are donated by business. What isn’t donated is purchased out of pocket by Young and his wife, Rachel, including seeds for produce and freezer bags, among other necessities needed to grow a productive garden.

“My wife and I go out of our way to help these inmates the best we can when they want to learn and work,” Young said. “A lot of this comes out of my pocket. A lot of people donate to help us out but the biggest majority is paid for out of pocket. We don’t mind it because it is helping out.”

Inmate Amber Fleming said there is something about sitting down to a meal and eating food you helped grow.

“Working in the garden is something I wanted to do,” Fleming said. “It is nice getting compliments about the food we have grown. It is also a learning experience. I have learned a lot. I also know this is hard, hot work.”

“I believe the garden is very important,” Cunningham said. “This is helping save money on food. That is money that can be spend on other things the jail needs. I wish I wasn’t in here but at least this allows me to do something productive while I am. It gives you self worth. I feel good about myself after doing that hard work.”

Young said some former prisoners have informed him of starting their own garden upon getting released.

“Some of them that had never worked in a garden have learned how and some of them have become so excited that when they get out they started their own garden,” Young said. “It’s a learning skill. They are working and it’s not easy work.”

Young is proud of the garden at the County jail and he’s pleased with the work ethic it has created within the jail population. He is even more satisfied with the money it has saved Cannon County taxpayers during the last four years.