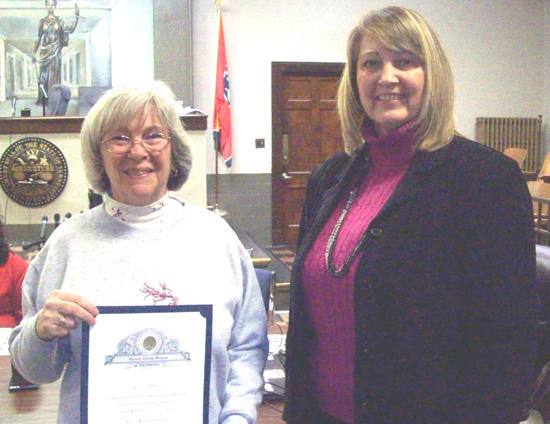 Ms. Ann Bartholomew was recognized at the Cannon County Board of Education meeting Thursday night at the Courtroom of the courthouse. Ms. Bartholomew, a teacher in the Cannon County School System for 26 years and currently teaching at Short Mountain School, is retiring effective Christmas Break.

The Board meeting got underway with the approval of the consent agenda which included the approval of the Lowe's Toolbox for Education grant at West Side School. The grant totals $4,000. The school will run it though their books if they are awarded the grant.

Dr. Barbara Corry and Connie Foster, Schoolwide Positive Behavior Coaches in the Cannon County School System, recognized the schools that have met the 80/80 criteria for the SWPBS program. Dr. Corry and Foster went into each school to survey how well the students knew the rules and how well the teachers were teaching and implementing the rules.

All schools scored over 80 percent in the assessment. Westside scored 80.4 while Cannon County High scored 84.3. Eastside came in it at 90 percent while Woodland, Woodbury and Auburntown each scored 96.4 percent. Short Mountain led the School System in the survey scoring the highest scores, a 98.6.

Pam Sonderman addressed the board to let them know she submitted the application to continue the renewal of the Autism Grant. The paperwork was due on November 15th and it is an extension of the grant that has been awarded to Cannon County Schools. The grant money is based on discretionary funds left at the end of the year. The State awards the monies based on what is left over. Ms. Sonderman cautioned the board that they may not get the grant extension because there may not be any monies available due to state budget cuts. Currently the grant funds the salary of an autism teacher to consult with students who have autism.

The Board upheld the decision of the Schools in not allowing Ms. Dianna Sapero's children to ride the school bus. Ms. Sapero's children had been riding the bus to Auburntown when it was discovered that they were living outside of Cannon County. The actual residence itself is outside the county; however, the end of their driveway is in the County. The bus had been picking them up after using that area as a turnaround.

Director of Schools Barbara Parker reported that the Cannon County Youth Dream submitted 21 grants. Out of those grants $7,800 were funded.

Ms. Parker also announced Tennessee Department of Education Commissioner Kevin Huffman will be meeting with the Cannon County Central Office to go over the Budget Proposal of the State. Huffman is scheduled to meet Monday morning at 8:00.

The majority of the meeting was spent going over the recent report card issued by the State. There are two accountability systems that are reflected in the report card. The first system is the "Race To The Top" or "First To The Top." The scores are based on 3rd grade reading, 7th grade math and graduation rate.

In the Race to the Top program schools are placed in four categories based on scores. The Reward Category is the Highest scoring schools. Currently there are 5 percent in the state that is termed Reward Schools. The second Category is the Middle Category which comprises of 80 percent of the schools. Since Cannon County Schools aren't listed in the other categories, they would be considered a Middle Category school. The third category is the Focus category. These are schools that make up 10 percent of the states schools. These schools have the largest gaps in achievement and lowest graduation rate. The achievement category rounds out the categories they are the lowest scoring proficiency schools at 5 percent.

The second system of accountability is the No Child Left Behind system. In this system four schools were placed on target status. Cannon County High School, Woodland and Westside schools were on target status for math. Woodbury Grammar school is on the target list for Math and Reading. The No Child Left Behind system scores students based on reading, math, science and social studies. In the Elementary Division, the target set by the school system was 49 percent. State proficiency is 54 percent and Cannon County scored 47 percent in reading. In Math the schools set a target of a 40 percent score. The State's score is 41 percent but Cannon County only scored a 28 percent.

Graduation percentage is 87 percent. Cannon County came in with an 83.5 percent graduation rate, just under the state percent.

In the TCAP Criterion Referenced Academic Achievement. Grades 3-8 in Math Cannon Schools scored 44 percent which was a D while the state score was 50 percent. Cannon scored C's in each of the other categories of Reading language, social studies and science. In TCAP writing 5th grade the schools scored a B while 8th grade writing received an A as did the 11th grade writing.

The schools have plans in place working toward major improvement of these scores.

The next board Meeting Workshop will be at the Central Office on Tuesday, January 10th at 6:00. The next Regular Board meeting will be Thursday January 12th at 6:00 at the Cannon County Courthouse.

Print
Members Opinions:
jbryson
[Delete]
Mrs. Bartholomew
You have been an inspiration to many young children and I hope you enjoy your retirement. Cannon county is loosing one of the best.
sheabombay
[Delete]
Mrs. Ann,
The Williams' family will miss you, sure wish you'd have waited on lil T. Wayne to get thru your class but I do understand! Love and best wishes to a great teacher and Beta Sponsor,

katydid
[Delete]
I know that Ann has been an excellent teacher and a blessing to cannon county school system. I wish her the best! She will be missed.
[Delete]
I think it was back in the school year 92-93, or 93-94, at WGS. I guess you could say I was an unruly kid and needless to say you couldn't stand me. I think something you said has drove me more than anything in my adult life. I was talking in class with someone who was in beta club and you told him " don't you talk to him. He has nothing to loose and he is not going to do anything with his life. ". You were almost right. I flunked my senior year. Guess what though. I got my GED and actually graduated Middle w/a 3.65. I also ended up marrying a teacher. How about that. So what am I getting at? I just wonder how many kids you've screwed up in your years of teaching. I wouldn't say I've made it big or anything like that. I can say that because of you I live in a 400k house and have never been in trouble with the law. How did your own turn out? One more thing, as the name suggest, I am not in cannon anymore. Sorry guys. Just had to vent and get that out. To all the other teachers out there don't give up on the kids.