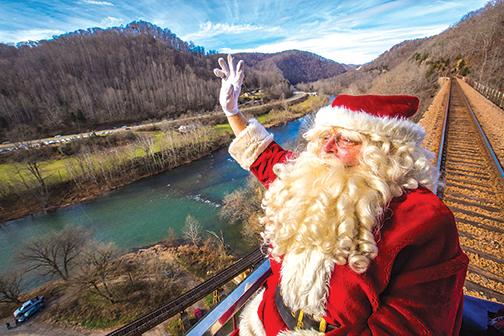 KINGSPORT, Tenn. - No need for the flying reindeer and sleigh on this Saturday before Thanksgiving, as ole St. Nick glides along a 110-mile railway while giving out toys and gifts on the merry route of the Santa Train.

This Appalachian tradition, which was birthed in 1943, starts at the crack of dawn in Shelby, Ky., and winds down a little over eight hours later in the holiday-spirited city that started it all, Kingsport, Tenn.

Joining the jolly old man in red as this year's celebrity guest was six-time Grammy Award-winning singer Amy Grant of Nashville, famed for her contemporary Christian songs as well as the pop hit "Baby, Baby" and the nostalgic holiday hit "Tennessee Christmas."

During the train's 72nd annual run, Santa, Grant and more than 100 volunteers aboard the train passed out 15 tons of toys, candy, dolls, food, apples, oranges and winter wear such as hats, socks, gloves and scarves to children at 14 communities along the tracks in Kentucky, Virginia and Tennessee.

Santa Train volunteers get off the train at each stop and hand bags of goodies to children, while the most famous man from the North Pole and five or six helpers toss candy, soft toys and gifts from a platform at the back of the train.

At each place, the loudest sounds come from children as they holler "Santa! Santa!" repeatedly. And Santa's eye are scanning the crowd.

"I'm looking for the child that looks like this toy fits and has a smile on their face," said Santa himself, who most of the year pretends to be Don Royston, a CPA and member of the Kingsport Chamber of the Commerce.

"I've been really blessed. I grew into the boots," said the fourth man to portray Mr. Claus over the years, now making his 16th trip as the jolliest man on Earth. "Each trip has its own memories. This year I'm seeing more sharing and passing along the toys."

Santa gets loads of help from the 132 folks riding the train, while more than 500 volunteers donated their time and labor earlier in the year, and CSX, Dignity U Wear, Food City and the Kingsport Chamber of Commerce provided support as sponsors of the big event.

The train stops from 10 to 25 minutes in towns with name like Marrowbone, Toms Bottom, Haysi, Clincho, Dante, Dungannon and Kermit before it chugs to a halt in Kingsport, Tenn.

But the Christmas spirit of good will to all men thrives the entire way as any number from a few hundred to more than 1,000 folks greet the train at each stop.

Maxine Kiser, 79 of Carbo, Va., has been meeting the Santa Train since she was 7 years old.

"I came to the very first one. Every year it's great. So exciting. I can't hardly wait for it. The first year we got toboggans, pencils and paper, but everybody wanted those big peppermint sticks," remembered Kiser, who brought her granddaughter and great-granddaughter.

Tianah Schoolfield, 8, of Clintwood, Ky., made her second encounter with the train and said. "I got books, a Pony play set and Disney stuff. I got to see Santa, and Santa gives out toys and it's fun when Santa throws things out."

Celebrity guest Amy Grant turned the event into both a Christmas occasion and birthday party as she brought her sisters and several of her best friends to experience the joy of tossing toys and candy from the train alongside Santa.

"Oh, my goodness, I was overwhelmed the first time, and I wish I could throw farther. I was so glad that by the end everybody got something. That was good news," said Grant.

"So I've been on the back with Santa, who by the way, is the hardest worker on the train, but when we got up this morning, we boarded the train when it was dark, and my sisters and I walked up all of the train cars, and there were just bags and bags four and five deep, and we all got choked up. There was nobody else on the train and all this preparation.

"Every stop has had a different feeling about it. I mean at one stop somebody gave me a gift, a scarf that they had knitted. I met one gentleman who said, 'I just want a picture. I drove six hours to meet the Santa Train.'

"I haven't seen one disgruntled person. No, I did. I saw one grandmother who was holding lots of bags, and she said, 'My children and grandchildren have all left me to get candy at the front of the train, and I've got to schlep this stuff up the hill," said Grant.

Susan "Tootsie" Williams from Alley Valley, Va., came with her daughter Megan, 24, and granddaughter Skyler, 1½, who got a small pocket book and bag.

"My grandbaby, this is her first trip to the Santy Train, and she wouldn't miss it," said Williams, who has been here before. "It has grown considerably. It makes me smile. There's not a lot to smile about anymore. A lot of these children, this will be Christmas for them and that's wonderful."

More than 100 helpers aboard the Santa Train take their turns at each stop handing color-coded bags geared toward boys and girls and specific age ranges. Among those is first-time volunteer Betty Yates, a nurse from Haysi, Va. She described the experience saying, "It's awesome, seeing the kids reach for the gifts and telling what they want. It's more fun than work, seeing their little faces full of excitement."

Rita Potter has been checking out the Santa Train for more than 40 years.

"I just think it's wonderful. The parents are as excited as the kids. Yeah, you gotta get up early but you gotta go. These are good memories for the kids," said Potter, whose granddaughter Chelsey Potter, 19, won a $5,000 Santa Train scholarship which allowed her to enroll at the University of Pikeville.

Another fortunate child, 12-year-old Calli Caudill of Bart Lick, Va., says, "I got a doll, bingo and a bag. This is fun and exciting and a great experience. The best part is being able to see everybody happy."

Near the end of the Santa Train run, singer Grant shares one of her most vivid memories of the long but exhilarating day.

"We stopped at one place, and they had a roped-off place for special-needs kids and young adults, and of course there's no pretense in a crowd like, and I loved that. But toward the back, they said, 'If you can just make it back there, there's a girl in a wheelchair,' who looked like she had pretty severe cerebral palsy," Grant recalled.

"She had a scarf that had like little white almost like yarny lace around her hands and circling her face. She looked like an angel. I said, 'Do you like to sing?' and so I sang a song, and she started kind of 'Uh, uh.' I could tell she liked to sing; so we launched into another song and by the end, she was singing her version of 'Oh, Come All You Faithful.' That was so great. I loved that.

The singer also noted, "On the last stop I had a bag of toys, and a young man maybe 13 or 14, he said, 'Could I have that truck?' and it was like a baby truck, puffy plastic, and I said 'Sure.' ... He said 'I've got a little brother I'd like to give that to,' and to me that was kind of the spirit everybody feels."

The Santa Train's own Santa reflected about what this adventure is all about and said, "I see the excitement of the children just seeing Santa, if I'm close enough to hand 'em a toy. This day is the culmination of seeing all the volunteers from all over the country.

"It's one of my greatest blessings in life that I have, seeing families come together once a year from all walks of life and spend some quality times celebrating Christmas."