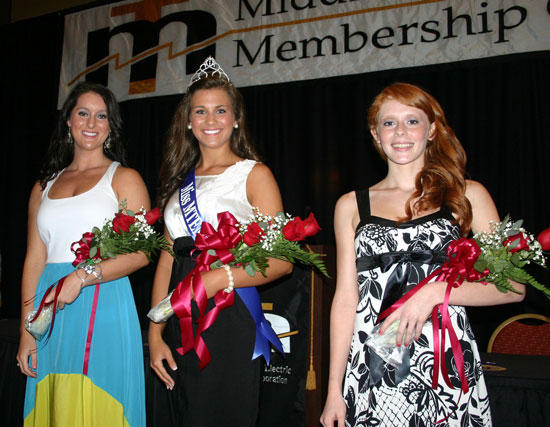 The daughter of Scooter and Kynn Sandefur of Lebanon, she was crowned Aug. 18 at Embassy Suites Murfreesboro – Hotel and Conference Center. For winning, Sandefur gets her choice of  $1,000 cash or a free trip to Washington D.C., valued at approximately $1,200, as part of the 2013 National Rural Electric Cooperative Association Youth Tour. Wilson ONE Ladies club sponsored her.

First alternate in the contest was Macy Payne, daughter of Mrs. Joetta Payne of Mt. Juliet. Cloyd’s Presbyterian Women sponsored her. She won $500.

Second alternate in the contest was Amber Wright, daughter of David and Jennifer Hight of Alexandria. The Statesville FCE Club sponsored her. She won $200.

The pageant was held as a part of Middle Tennessee Electric’s Annual Meeting of members. As part of its bylaws, MTEMC has held a members’ meeting every year since the not-for-profit cooperative was organized in 1936.