Riders remember the Trail of Tears 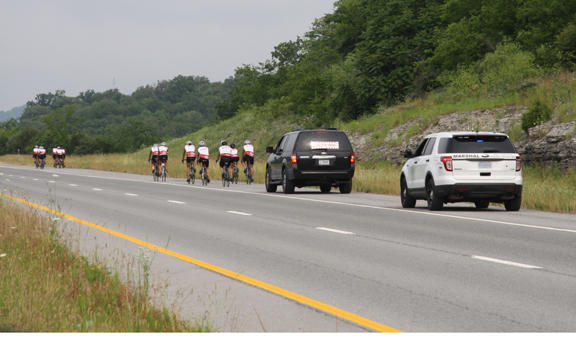 Remember the Removal bike riders pedaled through Woodbury as they began a three-week path to retrace their ancestors' footsteps along the Trail of Tears.

A historic marker on the edge of town marks a portion of the trail through Cannon County. The marker states:

“The Trail of Tears”
"In the valley to the south, that part of the Cherokee Nation which took part in the enforced overland migration to Indian Territory rested for about three weeks in 1839. About 15,000 persons of various ages took part in the march. Several who died while here were buried in this area."

Those graves were unmarked.

The Remember the Removal bike ride is an annual commemoration of the 950 mile walk.

"These men and women will retrace our tribal nation's route to Oklahoma from our ancestral homelands in the east to our current capital city," said Principal Chief Bill John Baker.

"It will be a personal and life-changing journey for them," Baker said.

This year marks the 175th anniversary of the removal of the Cherokee people from their homelands in Tennessee, Georgia and Alabama to live in Oklahoma, which was then Indian Territory.

President Andrew Jackson began the aggressive policy of Indian removal in the 1830s following the discovery of gold on Cherokee land.

One of the principal paths the Cherokees followed ran through Cannon County. Called the "Trail of Tears," the march was a brutal 950 miles. Of the estimated 16,000 Cherokees forced to make the journey to Indian Territory, an estimated 4,000 died due to exposure, starvation and disease.

Beginning in New Echota, Ga., 22 Cherokee Nation and Eastern Band of Cherokee citizens began the long bike ride through Georgia, Tennessee, Kentucky, Illinois, Missouri and Arkansas on the way to Oklahoma. The three week ride is expected to end June 21.

"These men and women will retrace our tribal nation's route to Oklahoma from our ancestral homelands in the east to our current capital city," Baker said.

"As a student of history, and specifically Cherokee history, I am envious of the journey they are undertaking and the understanding they will attain by travelling the route of removal.," he said.
The ride was started at the Cherokee Nation in 1984.

"We know this is going to be a tough physical and emotional journey ahead, and it's not going to be easy," Michell Hicks, Principal Chief of the Eastern Band of Cherokee Indians, told the riders. "Friday was a big day for us repurchasing 108 acres at the Cowee Mound. Things are occurring for the Cherokee people, and we continue to progress."