Rhonda Martin: Why God Made Teachers 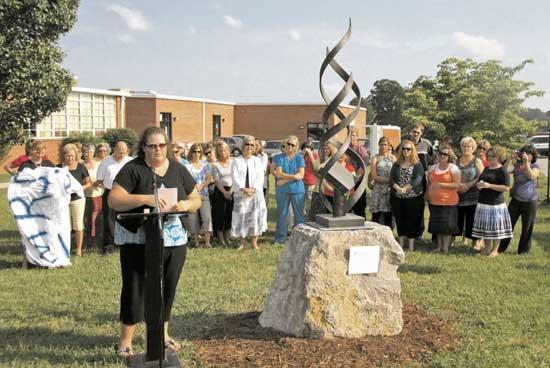 Woodland PTW President Deena Thomas addresses the crowd after a monument in memory of former teacher Rhonda Martin was unveiled during a dedication at the school Monday (May 23).
Rhonda Martin dedicated more than half of her life to teaching youngsters and becoming a role model to them for the 25 years she taught at Woodland School before succumbing to cancer at age 48 in January.

Martin’s spirit lives through the countless number of people she impacted through the years, but Woodland assured her memory always will be part of  the school community during a dedication May 23.

A beautiful sculpture was dedicated to honor Martin’s 25 years of service (1985-2010). The sculpture, which will feature a bronze plate with Martin’s name and years of service, is erected in front of the school near the main entrance.

“Mrs. Rhonda touched the lives of many students and staff in her many years of service at Woodland,” Woodland PTW President Deena Thomas said. “She was a wonderful lady and meant so much to so many people.”

Roger Martin, husband, and sons Douglas and Austin, were among those in attendance.

“We loved her very much and she was very well respected in the educational field,” Parker said.

Parker talked about Martin’s impeccable service and closed with the poem, “Why God Made Teachers,” by Kevin William Huff.

Former student Jordan Bailey told the crowd how Martin had not only been a great teacher but motivated him to achieve more.

“She was a mentor,” Bailey said. “Don’t simply remember (Mrs. Rhonda) but see her as an example, and if you have the opportunity to help a child such as me you will take it and rise to the challenge like she did.”

Melodie Daniel taught with Martin at Woodland for 14 years and the two became the best of friends. Daniel spoke of Martin’s unwavering strength and love for family, friends and a desire to help others during an emotional and moving delivery.

“We know that Rhonda has left an impression upon all of us here, whether you were a student, a parent, or a coworker,” Daniel said. “She made Woodland part of her life with dedication, enthusiasm, passion, honesty and integrity. Each one of us has been touched by the unselfish strength she had as she battled that disease that took her life. She would not want the attention today, but she would be proud to know she touched our lives in such a way that we have a monument in her memory.”

Daniel said Martin took a special interest in each individual child and that was one of the many great qualities that made her a highly-successful and respected educator.

“Teaching fit her like a glove,” Daniel said. “She knew how to motivate her students and was able to get the most from them. Each child was an individual to her and she took time to meet that child’s needs. If it meant to stay late and grade papers or cut out letters on card stock so a child could learn his spelling words that is what she did.”

Daniel described her friend as “unselfish and strong,” and gave family members a solid piece of oak with Rhonda Martin’s name and years of service inscribed to signify those traits.

Print
Members Opinions:
Jraine
[Delete]
I was wondering who was the artist?