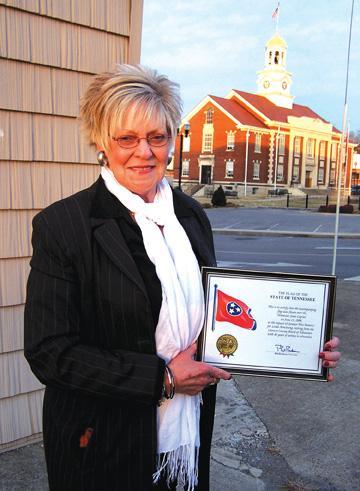 Linda Armstrong displays a plaque awarded to her following her retirement from teaching.

Retired Cannon County teacher Linda Armstrong has spent most of her life on Woodbury Square. "I dream about it all the time," she says, remembering her father's store that stood on the corner across from the courthouse. "If I had the money, I'd go back and redo it, just like it was."

In her memories, "Mother and Daddy are there with their little adding machine and cash register," she adds.
There was a big old potbelly stove in the back of the store, where people would gather around to play checkers and Rook while her father Estes Armstrong made sandwiches from fresh-cut bologna and cheese, Linda recalls.

"They came from the courthouse and the shirt factory and sat in the wicker chairs while they ate," she says.
Estes hung country hams that he cured himself on the family farm or bought from other Cannon County farmers, in addition to other produce, from a tree that grew in front of the store. It's gone now, but the tree full of hams was a well-known sight there at the northwest corner of Tatum and Main streets.

One Woodbury old-timer, Jack Rogers, even remembers an entire hand of bananas hanging there. "We'd walk past those bananas, and my brother would swear he'd save his money to buy one," Rogers says. "And he did, too."

But the hams and bananas were just the tip of the iceberg, so to speak. Armstrong Grocery carried almost everything that local families needed from 1935, when it opened, until 1957, according to Miss Linda, as she was known by her pupils during her school-teaching years.

The store sold groceries, animal feed, and a variety of other items. "When Sue and I were in our teens, we asked Daddy to order face creams and Kleenex, girly stuff," Linda remembers.

When Woodbury's first "modern" supermarket was built just a block down Tatum Street, on another corner of Woodbury Square, young Linda was impressed by the rival store's shopping carts and other contemporary paraphernalia. "We didn't have those," she recalls. "I told Daddy, 'you've got to get up-to-date.' I didn't appreciate what we had. I just took it for granted."

What Linda didn't realize at the time was her father's competitive ace in the hole: "Everybody knew Daddy," she says now.
The family lived in the store building, too, with bedrooms and a kitchen upstairs, and a big living room at the back of the store that doubled as a storeroom for the business.

"Mother birthed me in back of the store, right across from the hospital," Linda says. "The doctor just came across the street. She made my sister leave when it was time because she didn't want her to be scared."\

Linda was the third of four children. Her brother McQuade was 21 and her sister who was sent out of the room, Lois, was 12 when Linda was born. Eighteen months later, her mother delivered Linda's little sister Sue.

Church was important to both of Linda's parents, but they didn't belong to the same one.

"Mama went to Woodbury Church of Christ up on the hill," Linda says. "She was a devoted member, and we went with her. Daddy was a deacon at First Baptist, but they never fussed about religion."

Her father, a decorated World War I veteran, also ran a farm "out on Doolittle," and when the fair was in town, he operated a concession stand that sold fish sandwiches and other snacks. "People came from Murfreesboro, McMinnville, Manchester, and all around to get those catfish sandwiches," Linda remembers.

During the fair and while Estes farmed, Linda's mother Glera Alexander Armstrong ran the store. While their mother worked, Linda and her little sister played up and down the sidewalk in front of the store.

They played Mother-may-I, rode a tricycle, or played "rock school" with the other children. In "rock school," Linda says, "I was the teacher and I had one rock in my hand. The other kids all lined up on the top step over there," she adds, pointing to a set of steps beside the sidewalk. "They had to guess which hand the rock was in. One picked at a time, and if they got it right, they came down a step. The first one to the bottom was the next teacher."

The future Miss Linda always wanted to be the teacher, she says, and when she grew up, that's exactly what she became.

"I taught fourth grade for 26 years in the same room at Woodbury Grammar School," she says. "Then I taught the GED classes for 16 years."

During many of those years, she was married to Donald Sherrill, so her students knew her either as Miss Linda or Mrs. Sherrill. However, later she returned to her maiden name.

Linda loves to reminisce about her years in the classroom. She recalls one little fourth grader who wrapped the teacher around his fingers. "I remember one little boy was a talker. I'd put my hand up to tell him to be quiet, and he'd kiss my hand," Linda says with a smile.

But the little ones weren't the only students who made strong impressions on their teacher. In the 16 years she spent in adult education, Miss Linda says she sometimes learned more lessons from her students than they did from her.

"Sometimes I wish I'd taught the parents first, because I would have understood why some of the children had such a hard time," she says. "Their parents weren't educated enough to help them with their studies."

Another lesson she learned from her adult students was: "Don't give up on anyone. One year the valedictorian at the GED graduation was a young man who was an inmate in the county jail. Everybody had given up on him," she says. "But he was valedictorian."

The adult classes always included a graduation ceremony for the students who were receiving a high school diploma. The last of those ceremonies she attended was a proud time for Miss Linda because of the success of her students, and because she was being honored herself.

State Sen. Mae Beavers had arranged to award Linda a Tennessee flag that had flown over the State Capitol in recognition of her 42 years of service to the students of Cannon County.

Estes and Glera would have been so proud. "Mother and Daddy always wanted me to be a teacher," Miss Linda remembers with a smile.

Print
Members Opinions:
wbrysoldier
[Delete]
What an awesome story about a truly caring lady.
honeymooner1978
[Delete]
This story was heartwarming. I remember first moving down here from Pennsylvania and McQuade Armstrong making us feel so much at home and wanted. We have lived here 36 years now but my husband sat around the stove with McQuade and Bill Smith and many others and they accepted him like he belonged. I will never forget the Armstrong family being so loving to us.....what a beautiful story Linda wrote that touched many hearts I’m sure...
gm
[Delete]
really enjoyed the article. thanks for sharing.