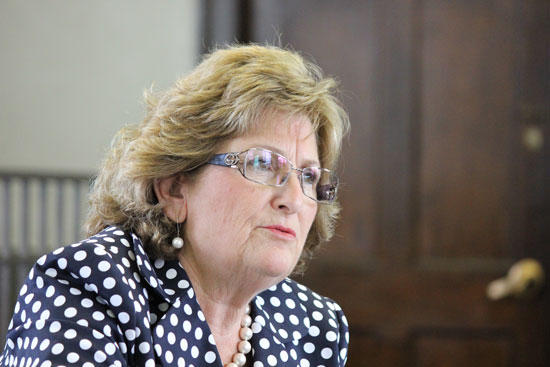 One of the gatherings she met with was a meeting of the Cannon County Jobs Task Force held at the courthouse.

Rep. Black said one of the ways the federal government can assist Cannon County in attracting jobs was to limit the rules and regulations it imposes on businesses, which would help make the country and county more business friendly.

Print
Members Opinions:
[Delete]
Can't help but wonder how many of the 44 people who have voted indicating Ms. Black is doing a poor job are the same as the 42 people who admit they have never attended a government meeting at all. How many showed up to personally tell her how she could be doing a better job?
[Delete]
Mrs. Black also stated that the PRIMARY way to help Cannon County was to have local elected leaders such as the County Executive and the Commissioners create incentives to entice business to locate here.

She mentioned that having a building, water access, sewage, internet capabilities, land, etc. are part of the process of helping bring industry to Cannon County. All of those things must start on a local level by the elected officials that have the power to change them.

It is an easy thing to suggest you want industry in Cannon County, but it takes effort to actually make it happen. It is like everything else in life, it begins with you deciding you want make a difference and moving forward.

In our current state there is ZERO reason for anyone wanting to re-locate or create any type of industry to consider Cannon County as a place to be.

[Delete]
How many manufacturing facilities are currently owned by Cannon County? At one point there were several but some were sold if I remember correctly. Are those sold being utilized as businesses? Building a spec building is costly with no prospective occupant available. Most often, modifications have to be made to suit the business' particular needs.
We have water access, sewage, internet capabilities, land, and in general have been willing to work with prospects with regard to tax deferrals. What it appears mostly that Cannon County needs is an experienced and qualified marketing agent for these resources. One who can reach out internationally, if necessary, to contact those businesses that seek such amenities in the Middle TN area. Cannon County must compete with 94 other TN counties. Many have strong marketing personnel or strong industrial boards who actively work 365 days per year to attract such industries. It takes far more than a sign reading "Cannon Co. Welcomes Industry." What we really want is a philosophy that Cannon County welcomes "selected and community friendly industries." Those have to be sought out and attracted. Not left to chance of discovering us. We do not want industries that would drain and stress our resources or destroy the natural beauty of our county. Neither should we desire industries that employ only a minimal number of our citizens. Any industry, however, that meets certain criteria might yet be good in that they contribute to the tax revenue needs of the county and assist in providing the services needed in the community. That is to say that several smaller industries might add up to the advantage of having only one larger one.
I prefer to think Cannon County only "half full" rather than "half empty." There is much yet to be realized by our county in terms of providing employment opportunities.

[Delete]
I am with you on every point except and that is I see us as half empty because we have such great potential, but no one seems to want to fill the glass up to the top.

We have all the capabilities to make it happen and do more than just "hope someone discovers us" as you said but as I said above that requires effort and I just don't see much of that happening from the people who should be and could be making a difference!

[Delete]
Patience please. This year the commission is embarking on making a lot of those things happen. We have had to rebuild several committees to let them form a constructive way on getting these things done. Give them a chance to make things happen. I have faith in our ability as a commission to do what you are asking.
Bob Stoetzel
Chairman Cannon County Commission

[Delete]
Patience is a virtue I have never had! HA :)

I know you are trying Bob and I do have faith that you and some of your fellow commissioners are working on them, but you have to understand too that a lot of this should have been and could have been done a long time ago. Time is of the essence and it not a luxury we can afford to waste any more.

I only want what is best for Cannon County and nothing more and sometimes my passion for it seems a little abrupt, but since I have no other goal in mind I decided to make it a priority of mine to hold the people who do have the power accountable and keep their feet to the fire.

Re-election is not something I have to worry about, so it makes it much easier for me to speak my mind and say the things people don't want to hear.

[Delete]
In these times of reduced inventory on hand the logistics of raw material and finished product is vital to any companies existances. Without adequacy infrastructure i.e. trains, barges, airports and interstates to recieve and deliver products, we would not even be considered by many companies. For these reasons I agree with Bonnie that several small companies could be our best option and would serve us the best. Also there are several new commissioners this term and I do believe they all ,old and new, understand the need and severity for controlled growth. I do have patience and faith but Bob as an experienced and seasoned politician you must acknowledge that we have tradationally been slow to act, at best, in the past.
[Delete]
In what manner is the TN Dept. of Economic Development assisting Cannon County in attracting industry? Is this even a valid source of expectation any longer? Have grants dried up that were once offered by this department to assist creation of stronger infra-structures?
Is our county government doing all that is possible to support and develop businesses and industries already present? If so, in what ways is that support given? Are their industries already here that wish to grow and possibly employ more local residents? How can Cannon County assist them in achieving such objectives? Does our Industrial Board attempt to help such companies? What does Cannon County do to showcase current industries and businesses in order to encourage growth and development? It would seem we should surely show appreciation for those currently doing their part in providing employment opportunities for Cannon Countians. Such interest and participation cannot be left solely in the hands of a Chamber of Commerce. It should be a viable, living part of our County daily activity to promote such industries as already exist within our boundaries. It is these businesses that support our tax structure either directly or indirectly by providing income opportunities for the citizens who reside here. What can county government do to promote and support such businesses so that they may offer even greater opportunities in the future?
[Delete]
Bonnie, it would not matter because our Industrial Development Board doesn't even bother to show up to the meetings to discuss anything.

Until that changes and until we get people that actually give a crap then we will be exactly where we are right now.

I might also add that in the last EIGHT years the IDB Committee has had a quorum THREE times.

Talk about pathetic!
[Delete]
Corey, this stat is frightening. How many times a year does this board meet? Eight years is a very long time to have no more than 3 quorums! Maybe this group needs to be whittled down to only those who are really interested. Developing a quorum then would also be much easier and progress could be made. Do records of these meeting exist so that it could be determined if those missing meetings fall into a pattern? Are there members who really just aren't interested?
[Delete]
Actually Bonnie, I stand corrected. From what records can be found I am told there was only ONE time a quorum was met in eight years.

As far as members not being interested, I can't speak for them but it would appear as if that was the case.

Changing that board lies within the power of the County Commissioners. Perhaps they will look and see if something can be done.

The IDB has a lot of responsibilities that can help create jobs in Cannon County and help the businesses that are here. They basically are the land lords and collect rent and ensure everything is up to par.

To me it speaks volumes as to the amount of concern this current group has if they can't do something as simple as meet to discuss issues.