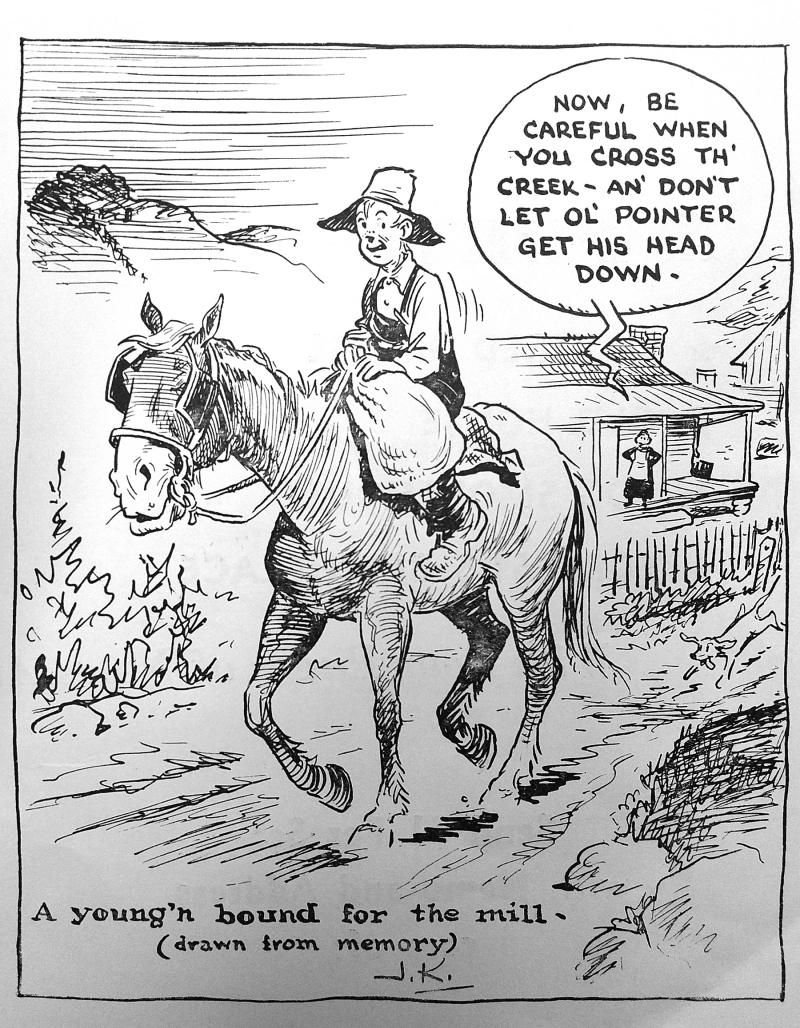 Cannon County's Hen-Peck Mill didn't have a thing to do with a bossy wife and a weak-kneed man.The old mill was what the "mill" name implied.

But it was "Hen-Peck" that caught the fascination of (the late) artist Jack Knox, a nationally-acclaimed editorial cartoonist in the 1950s, the heyday of operations for Nashville's afternoon "Banner" newspaper (now defunct).

That's how he discovered "Hen-Peck Mill" located north of Woodbury on Cavender Branch Road, located past "the old perpetual spring" out of the mountain side along state Route 53 leading up to the Gassaway community.

"I've been to Hen-Peck Mill," confirmed Col. Jim Stone, of the historic Stone family for whom Stone's River is named. "You turned left off Route 53, on to Cavender Branch Road ... I'm getting so old, that I recall going to Hen-Peck Mill at age 8, with my dad (Hilton Stone) in our old 1936 Plymouth. We'd take our corn to be ground into meal for cooking and consumption."

Col. Stone noted his branch of the Stone family descended from William Stone, the son of Uriah Stone, and is credited with being the original "Stone" family in what evolved into today's Cannon County.

Editorial Cartoonist Knox featured Hen-Peck Mill in his 1956 publication: "A Vanishing Era" that also featured rural Middle Tennessee subjects such as "team plowing by mules" and "the old sorghum mill."

Knox described in 1956 how his interest Hen-Peck Mill came about: "The quaint, pleasing oddity of the name in itself is enough to sharpen interest and whet curiosity. Its setting is in a narrow valley deep in the rugged hill country of Cannon County, some four or five miles north of Woodbury."
Artist Knox traced the mill's history: "The old mill was built in 1834 by William Neely."

So, how did the name "Hen-Peck Mill" come about?

"Its name derives from the fond banter of early settlers who said the mill ground so slowly that a dozen hens could peck the grist faster than the stones could grind it," Knox noted. "'Hen-Peck' became the accepted designation of this memorable Middle Tennessee landmark."
By 1956, ownership of the Hen-Peck Mill had changed.

"Hen-Peck's present owner, Fred Stone, has lived in the house across the road from the mill since 1902," Knox wrote in his article. "His father (James Stone) was the miller for many years. Stone over-hauled the mill in the middle 1940s and operated it until about four years ago.

"And talking with him (Fred), you get the feeling that he has a notion, lingering in the back of his mind, to reopen old Hen-Peck one of these days --- maybe with an electric booster to speed 'er up a little."

This particular branch of the Stone family evolved from Eusebious Stone, another son of Uriah Stone.
Back in 1956, owner Fred Stone described the mill's slow operation: "In dry spells, it's mighty slow ... four bushels a day, maybe. But in a (wet) season like we're having now, she'll handle 40 or more (bushels per day)."

The mill was constructed as the "over-shot type."

"The trough, or sluice and mill race, runs to a great, gushing spring in the hillside, some 200 yards distant. There's a small dam at the spring, but no mill-pond," Knox recorded.
The late artist Knox described Hen-Peck Mills' era: "In this quiet atmosphere of rustic charm, it isn't hard to conjure up the memories of other days: selecting and shelling corn for meal ... the sack of shelled corn thrown across the withers of a gentle mule, a young'n up behind it for the long, bareback ride to the mill. (One hears) the sound of splashing, churning water ... and the rhythmic groan and creak and throb of the waterwheel mill at work. Hot corn pones made from fresh, water ground meal.

"And first thing you know, you sort of hope that one of these days, Fred Stone will turn the water back in the trough and put old Hen-Peck back in business. I do," the famous editorial cartoonist concluded.

Knox's dream didn't come true as Hen-Peck mill stayed in business only until the late 1940s.

The late author Robert Mason writes, "In 1948, farmers still patronized the mill, carrying their turn of corn on horseback as of old because, they claimed, the slower-ground meal made better bread than that of gasoline-powered mills."

But eventually owner Fred Stone got too old to keep running the mill and closed it for good.

Today there's little evidence the mill ever existed except for the state Historical Marker standing on the Woodbury Courthouse grounds along with an old millstone from Hen-Peck Mill.

But Cavender Branch, which once powered the mill, continues to flow away some 4.5 miles away as the memories of its pride and joy fade.