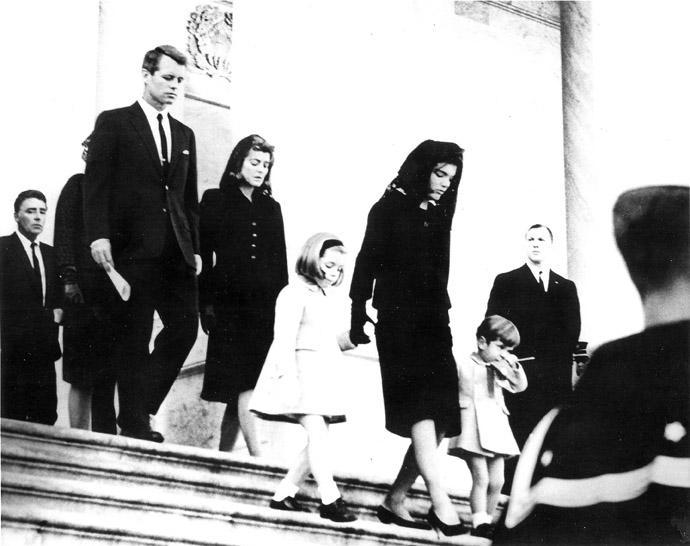 KEN BECK
For the Courier
In early February 1964, Secret Service Agent Bill Carter was assigned to escort Marina Oswald to the Warren Commission in Washington, D.C.
"She had a suite at the hotel. There was little foyer outside between the suite door and hallway. It didn't have any heat in it. I had an overcoat and gun. It wasn't warm. She'd open her door and say, 'I'm very uncomfortable about you sitting in the cold.' So she would open the door so heat from her suite could come out in foyer," Carter reminisced.
"She was so nice, so when we were leaving, before we left the hotel, she had a Polaroid [camera] and asked if I wanted to take a picture. I never really took that seriously. Probably 30 years later, I picked a book up from my bookshelf, and I had used it as book stop, and it fell out of that book."
The agent also found Robert Oswald to be the antithesis of his assassin brother.
"Lee's mother Marguerite had Robert sent off to an orphanage, and he became a model citizen, had a college degree. He had everything the rest of us have. I liked him a lot. His wife and children were so typical. Marguerite raised Lee, and when he finished sixth grade in New York City, he refused to go to school anymore," reflected Carter.
"They arrested him, just a kid. If you were a truant in New York, you were brought into the juvenile authorities. So they took jurisdiction of him, and his counselor made observations and assigned him to a psychiatrist who diagnosed him as mentally ill and recommended psychiatric treatment. They were under some state authority, and mama said he didn't need any treatment. By the way, he told the psychiatrist that his mother hated him and that he was a burden to her."


A lost soul
Through the course of his interviews and reading reports, Carter found that Lee Harvey Oswald, who never knew his father, had lived a short, miserable life filled with rejection.
"We could never find that he had a single friend, not one, a buddy. He went into the Marines at 17, and they made fun of him. He had been bullied in school. He was odd. . . . Marines are kind of macho, and here he was. They really let him have it.
"I can't remember what he was kicked out for but he was studying communism while in the Marines. [Texas governor John] Connally was secretary of the Navy when he was kicked out. [Connally was in the car with Kennedy at the time of the assassination and also shot by Oswald.] I always said, 'I'm not sure he was shooting at Kennedy. He was shooting at authority.' The fact was that he admired Kennedy and he had expressed admiration for Kennedy at times.
"We know that he marched in demonstrations for liberal causes. . . . He had tried to kill General Edwin Walker, founder of the John Birch Society, who was a radical conservative, so it didn't make a lot of sense. I think Lee was lashing out, was sick. He was not a bit of different than any of these school shooters or mall shooters we've had in recent years. The profile's the same," noted Carter.
"He never expressed any hatred toward Kennedy with Marina or anybody around. He had with Connally but nothing recent. I think he was lashing out at authority. When he went home to see Marina, he went there to get her back, and she wouldn't talk to him. She locked herself in her room.
"My theory on it is the weekend he went to see Marina and try to convince her to come back, they had had an argument. She told him not to come out. He also told Buell Frazier, the guy he rode home with out there, that he was going to take a driver's test. He was learning to drive and trying to convince Marina to get a car. They didn't have a car, and he didn't know how to drive.
"He had been taking some driving lessons, so that weekend he took a driver's test. Why would you do that if you knew you were going to assassinate the president?


"He told Frazier, 'I'm going home to get some curtain rods.' It occurred to him, 'what if she doesn't come back?' He hated, I guess, society as a whole. He went to the Soviet Union. He hated them. He never could adjust to any environment he was in.

Why Oswald shot JFK
"If you've been rejected at everything all your life and had no parental guidance and had a mother like he had, then I can understand. You're mentally deficient.

"So I think he had it in his mind that if this is the only person that had ever identified with him, married him, lived with him, then he had no other person on this planet that he could turn to. That night she rejected him, he put his wedding ring and money on the table, got his rifle and came back, and I think he was thinking, 'I'm gonna shoot somebody with authority.'

"It was like he was pounding his chest, saying, 'By god, everybody knows who Lee Oswald is now.' I'm thinking that was his payback to everybody that had ever mistreated him including Marina. I think it was just that simple. I'm basing that on all the facts that I had before me at the time and since," said Carter.

Among those facts were the testimonies of Howard Brennan, who across the street from the building watched Oswald fire the shot from the sixth floor, and of three young men on the fifth floor who heard the cartridges hit the floor. There were also the retrieved bullets, which ballistics tests matched to Oswald's rifle, as well as the bullet fired seven months earlier at General Edwin Walker that also matched the rifle.

"There was no evidence that Oswald ever thought about shooting Kennedy. There was no planning, but I think had Marina said, 'Yeah, Lee, you got your license. Go ahead and get a car. I'll give it a try one more time,' that Kennedy would have lived.

"He never succeeded in anything, nothing, and then came that final rejection. He had to lash out."

As for the interviews conducted with Oswald before he was killed, Carter says that he remained defiant, never admitting his guilt.

"I base my opinion on the facts I saw with my own eyes, and people I talked to there, the witnesses. All the evidence points to Lee Oswald," said Carter, who dismisses the various conspiracy theories.

"I'm in peace with my mind if I look at all the facts as I saw them there. I never had anyone suggest to me there was anything other than Lee Harvey Oswald."

Premonitions of death
The former Secret Service agent says that Kennedy had premonitions that he might die during his trip to the Lone Star State. As it was, some of his own decisions may have contributed to his fate.

"When he was leaving Fort Worth, it was raining in Dallas and when they got on the plane they got word that it was clearing in Dallas. Had there just been a drizzle, they would have had to keep the bubble on top. It wasn't bulletproof but it was an inch and a half of Plexiglas. It would have deflected a bullet enough," recalled Carter.

"The second thing, if you want to be a politician there are certain risks that go with that. I think Kennedy believed that it was part of his responsibility to be accessible to the crowd and he loved that. . . . Had the bubbletop stayed on, he would have lived.

"He wouldn't let the two agents ride on the running board, which was our standard procedure, but you don't want to argue with the president. Had those agents been on those running boards, Oswald would have had to shoot that right agent off that running board and by that time the other agent would have been on top of him. Kennedy ordered the bubbletop off. He ordered the agents off the car.

"I ask myself now, 'Why didn't we argue with him.' That really bothers me. I think we liked him too much. Yeah, I felt it was a little bit of his destiny, I guess, sadly."

The man who killed Oswald
Along with his conclusions about Oswald, Carter also has a vivid recollection of his 90-minute interview with Jack Ruby, the man who gunned down JFK's assassin in the basement of the police headquarters with law officers and reporters all around.

The interview was conducted in Ruby's jail cell, which had no air conditioning.

"He was a little overweight and was wearing his underwear and undershirt. We had suits on and even with our coats off were perspiring heavily," recalled Carter.

"He starts rambling, going on and on about his love for Kennedy. He was Jewish in Dallas, Texas, and there were a lot of Jewish people there, and there was prejudice that existed in 1963.

"He talked about being a minority and how Kennedy was a champion of the minority, and he got extremely emotional about him and he would work himself up. It was like wow, I loved him too, but you know I had a funny feeling about his emotions for Kennedy.

"He admitted killing him [Oswald]. He just said, 'That S.O.B. killed my president.'

"There have been all these Jack Ruby conspiracies, the Mafia. Jack wasn't a Mafioso. I've met a few Mafioso's in my days, and they're very good. They're kind of like assassins. You don't get a kook; you don't get a Lee Harvey Oswald and hire him for an assassin. You get a smart disciplined guy to do it. The same way with Ruby. I saw him as a cheap burlesque operator on his own. He didn't have any influence with anybody."

Ruby shared the routines he went through the hours before he shot Oswald with Carter. Among them, he went to Western Union to wire some money to an employee, and he had his pet dog in his car.

It was only by happenstance that he noticed all the vehicles and lawmen outside police headquarters. The facts led Carter to deduct that Ruby acted upon irresistible impulse.

"I think Jack Ruby went in the basement that day and when he saw Oswald come down that corridor, he whipped out his gun and shot him. I don't think he thought about it. It was an impulse, 'Here's the guy that shot my president. I'll take that S.O.B. out.'

"Ruby was known by every policeman. They hung out at his burlesque places. He was in good graces with the police, and they knew he carried a gun. I didn't see anything unusual about it. We never could find any connection between Jack and the Mafia."

The assassination's biggest impact
Bill Carter remained with the Secret Service until the end of the summer of 1965, resigning and returning to the University of Arkansas Law School to complete his law degree and then begin a career that crossed from civil and criminal courts to representing rock and country music legends.

But a major facet of his professional legacy will surround those days 50 years ago when a nation lost and mourned a charismatic president, whose time in office was christened Camelot.