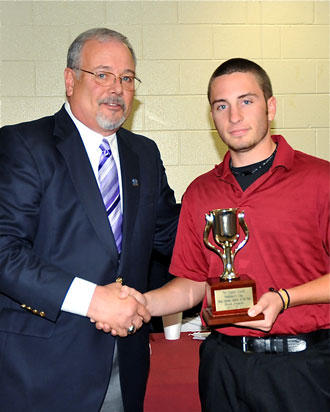 Cannon Courier owner/publisher William R. (Ron) Fryar and Brock Francis.
Lindsey Reed and Brock Francis made many sacrifices throughout their high school careers but the biggest may have been working extra to assure their grades did not suffer because of extra-curricular activities.

Those sacrifices paid off as each student-athlete demonstrated an ability to achieve at a high level in the athletic arena, as well as in the classroom.

Reed and Francis were honored as the Cannon Courier Publisher’s Cup winners for academic and athletic excellence during the second Cannon Courier Hall of Fame and All Sports Awards Banquet Thursday (May 17).

“Like so many other students who choose to participate in extra-curricular activities, these two individuals had to make sacrifices and learn to balance their time in order to achieve a high standard in academics and athletics,” said William R. (Ron) Fryar, owner/publisher of The Cannon Courier. “Lindsey and Brock demonstrated you can perform at a high level in the classroom and in other areas. They represent all that is good about high school athletics.”

Reed said going above and beyond is what is expected if you are going to participate in sports and clubs outside of school.

“People always make fun of the people who play ball because they think we have it so easy,” Reed said. “They don’t realize the late nights and getting back from a bus trip and getting home and doing homework at 1 a.m., and then you get a little sleep and make sure you get to class the next day so you don’t miss anything. It can stress you out but the main reason you are at school is to get a quality education.”

Francis said time management was key for him because of having to juggle three sports - cross country, golf and baseball.

“Two of the sports were fall sports and then baseball starts right after Christmas so you have to be able to manage your time,” Francis said. “There are many nights you don’t feel like doing your homework after being at school and then practice, but you have to be disciplined and strive to do the best you can in all areas.”

(The Cannon Courier will publish a special section commemorating all winners in June).