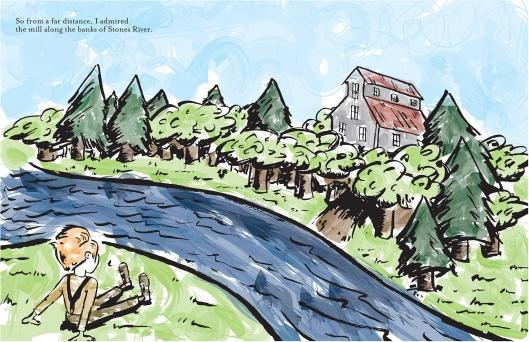 Woodbury's Connie Foster took a small chapter from her father's youth and put an optimistic spin to it to produce a fictional children's book surrounding the 200-year-old Readyville Mill.

Titled The Readyville Mill, the 34-page book, illustrated by Carl Carbonell of historic Hatch's Show Print fame, made its debut Saturday at the Readyville Mill where Foster signed and sold copies of the book ($20).

When first challenged by Readyvillian Thea Prince to tackle such a project, Foster, who grew up Connie Gannon in the Eastside community of Cannon County, was not overly enthusiastic.

"I was actively writing fiction for adults, teaching kindergarten and didn't think I wanted to write that kind of book," said the supervisor of attendance and coordinator of school health in Cannon County.

"Then I started teaching at Bradley Academy [in Murfreesboro] and was exposed to this wonderful list of children's books and really enjoying reading those aloud to third graders and thought, 'This is the kind of children's books I should be writing.'"

Foster initially began her tale as a poem, but then discovered that her family had a personal connection to the mill --- well, almost.

"One random day I asked my dad [Carmen Gannon], who was from the Short Mountain area, if he ever visited there at mill when they were generating electricity," said Foster. "He told me that my granddad moved their family into the Readyville community when he was a boy in the early 1930s, and they lived in a house wired for electricity but never got the power.

"He had to move back to Short Mountain without experiencing the luxury of electric light. I thought how fascinating to be so close to the mill but never getting electricity.

"I took that seed and wrote the story for my dad. I took what he told me and created this fictional tale that would change my dad's childhood story about his time there in Readyville."

The storyline she says "is about a boy longing to discover the mystery of electricity, who decides to sneak out one night to visit the mill and gets into some big trouble along the way."

While the characters are fictional, Foster borrows from history and particularly from inventive genius Arthur "Rat" McFerrin, an owner-operator of the mill during the first half of the 20th century. He wired the houses close to the mill with electric lights in 1918, turning Readyville into one of the first rural towns in the state to have electricity.

Robert L. Mason, in his History of Cannon County, relates how McFerrin controlled the ebb and flow of electricity.

He (Rat McFerrin) devised a way of converting the water power going to waste into electricity, by which many of the Readyville homes were lighted. At dusk it was necessary to throw the turbine into gear with the dynamo. At times, Rat found it inconvenient to be at the mill at the proper time to pull the lever down.

So he put a couple of hens and roosters in the room with  the long lever. At roosting time, they perched on the only available place, the lever. Their weight brought the lever down and engaged the turbine with the dynamo, and Readyville was lit up by chickens until cock crow the next morning.

Foster and her husband Ronnie have three grown children: Anna, Emily and Jacob, and a grandson Madden. She taught kindergarten, first, fifth and sixth grades over a span of 10 years at Eastside Elementary.

"It's been a long process. I guess I always had been a closet writer. As a kid I might write something and felt so good to get my feelings on page, and then I'd tear it up before anyone could see it," said Foster, who plans to have the book available soon for purchase at Woodbury locations as well as on a web site. "This has been a great experience."