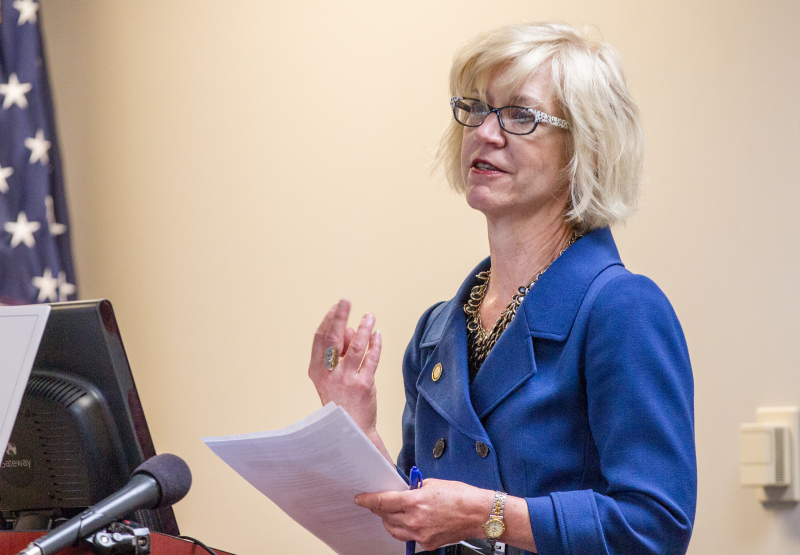 Ann Butterworth.
ERIK SCHELZIG, Associated Press
NASHVILLE, Tenn. (AP) -- Lawmakers are asking taxpayers to weigh in on a proposal to charge people to view public records, and the taxpayers' response so far is clear: No.
The meetings were organized by the state Office of Open Records Counsel at the behest of lawmakers who want to change the current law that allows custodians to charge for copies but not for simply inspecting records.
At hearings in Knoxville on Tuesday and in Nashville on Wednesday, almost all of the more than 50 people who delivered comments opposed the change. A final hearing was scheduled Thursday in Jackson.
Deborah Fisher, the executive director of the Tennessee Coalition for Open Government, said adding the new fees would create a situation where "a record is exempt if you cannot afford the fee set by the government official to see it."
WSMV-TV anchor Demetria Kalodimos said adding the fees would hurt the efforts of reporters, whom she called proxies for the public.
"To make that reporter drop a dime in the turnstile or risk being locked out from public information is essentially denying yourself access to the truth," she said. "Public records belong to the people."
Maria De Varenne , the news director of The Tennessean, recounted how her newspaper and other news media organizations had to seek a court order to reduce a $55,000 bill presented by the state to obtain records about the Department of Children's Services. The paper ended up paying for a fraction of the original price, but it still totaled thousands of dollars, she said.
"Those records showed that during a terrible two-and-a-half year period, more than 200 children died or were in near-death situations while under the agency's watch," De Varenne said.
Nashville Scene news editor Andrea Zelinski, the president-elect of the Tennessee chapter of the Society of Professional Journalists, called adding fees to view public records "a step in the wrong direction toward the dangers of secrecy, which could be powerful in the wrong hands."
But it's unclear how the outpouring of opposition to the fees proposal will affect recommendations presented to lawmakers in January.
Ann Butterworth, who heads the state open records office, said she would consult oral and written testimony, survey results and her advisory committee to offer conclusions to the Legislature. But none of that input is binding.
"I believe the agreement was for Office of Open Records Counsel to report to the General Assembly," she said. "Well, the Office of Open Records Council consists of one person. I am the Office of Open Records Counsel."
John Dunn, a spokesman for state Comptroller Justin Wilson, who oversees Butterworth's office, said that the aim isn't to fall on one side of the debate or the other.
"We don't envision it as being a recommendation of do this or don't do this," he said. "We see it more of a recommendation of factors to consider as they discuss this legislation.
"The office's function is not to be an advocate," he said.
Butterworth has been criticized by open-government advocates in the past for making decisions about transparency matters that are independent from the input of interested parties.
Butterworth in 2008 decided government officials could begin charging for anything more than one hour of staff time needed to fulfill records requests -- far less than the three hours recommended by open-government advocates, the two hours that the Tennessee Municipal League could settle for, or the four hours that the attorney general's office had OK'd.
"The responsibility for establishing the schedule rests with the Office of Open Records Counsel," Butterworth said at the time.
The open records office is accepting written comments at comments.open.records@cot.tn.gov about the proposed fee change and survey answers at https://www.surveymonkey.com/r/OORCcitizen through Sept. 30.
So far 246 surveys have been filled out by government entities, while 335 have been submitted by citizens.
Read more from:
COURIER SPOTLIGHT
Tags:
public records
Share: