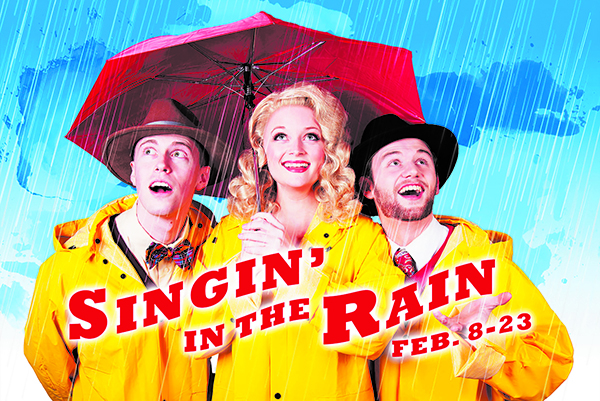 The Arts Center of Cannon County presents
Singin' in the Rain
Screenplay by: Betty Comden and Adolph Green
Songs by: Nacio Herb Brown and Arthur Freed

Singin' in the Rain has all the makings of a Tinseltown tabloid headline - the starlet, the leading man and a love affair that could change lives and make or break careers!

Don Lockwood and Lina Lamont are a hot item but, behind the scenes, things aren't always as they appear on the big screen! Meanwhile, Lina's squeaky voice might be the end of her career in "talking pictures" without the help of a talented young actress to do the talking and singing for her. Hilarious situations, snappy dialogue, and a hit-parade score of Hollywood standards complete with an onstage rainstorm
make Singin' in the Rain a show you don't want to miss!

Tickets are $15 with discounts available for students and seniors and can be purchased by calling 615-563-2787 Tuesday through Saturday 10AM-4PM or online at artscenterofcc.com and (subject to availability) at the door one hour prior to show time. Singin' in the Rain is rated G and is sponsored Smith Funeral Home.

The Arts Center is located on 1424 John Bragg Highway, just west of the town of Woodbury, approximately 20 minutes from Murfreesboro, Manchester, and McMinnville and one hour southeast of Nashville. Office hours are 10:00a.m. to 4:00p.m., Tuesday through Saturday. For more information call 615-563-(ARTS) 2787. Check out our web site at www.artscenterofcc.com.