Planning ahead saved west side of Square 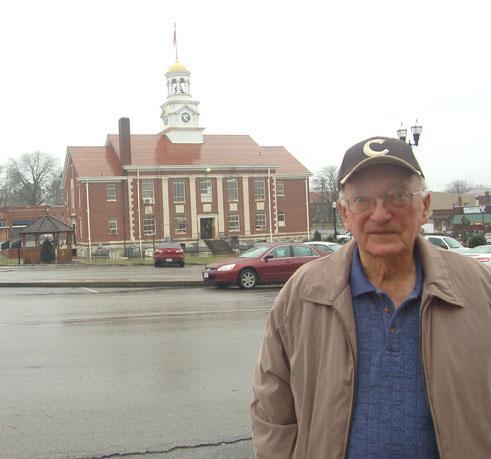 Vice Mayor Charlie Harrell's "fire proof" wall saved the west side of the Square in 2011.

Part II of a Series

The first time Jesse Frank Adams stepped foot in Woodbury as a boy in the 1920s, he covered the distance from his beloved native Short Mountain without shoes!

"And he walked barefooted back to his home on Short Mountain that same day," confirmed legendary Cannon County banker (retired) Bill Smith, age 95. "That barefoot boy became a visionary humanitarian who likely done more positively to improve life here than any single individual in history."

The physician owned and renovated two two-story buildings that are still functional on the Square's west side.

"Dr. Adams, after his son, Dr. Ralph Adams, went back to practice medicine in Boston, set up his medical practice on the Square, where he and another physician saw patients on the first floor, and after their own renovation in the 1950s, they had hospital beds for patients on the second floor," accounted Woodbury Vice Mayor Charlie Harrell at age 81. "This was after Dr. Adams had left Good Samaritan Hospital, where the Cannon County Board of Education and other government offices operate today."

During renovation work on the Square's west side in the 1970s, longtime insurance agent Harrell insisted that extra blocks and material be installed, resulting in a "fire proof" wall that helped save multiple businesses in the Jan. 21, 2011, inferno when J.P.'s Fine Swine Barbecue was destroyed.

"The resulting 'fire proof' wall saved the entire west side (Tatum Street) of Woodbury Square two years ago when the barbecue place was destroyed," confirmed Woodbury Mayor Harold Patrick. "That inferno started out so intense on a cold snowy night, the entire west section of the Square was threatened."

"You can't count the positive ways Dr. Adams continues to impact our community," Patrick confirmed. "During the big fire in 2011 on the Square, our volunteer firefighters, headed by Woodbury Fire Chief Bill Johnston, and state inspectors agreed the fire-resistant wall saved the adjacent restaurant as well as the Melton Law Firm," one of the oldest firms on modern-day Woodbury Square.

Other historic businesses have been on the Square …

Ninety-nine-year-young Nolan "Dude" Northcutt, a former Woodbury Mayor, recalls when Sam Sir had a dry goods' business on the Square.

"Sam Sir ended up moving off our Square, and established his business down in Lincoln County (Fayetteville)," Mr. Northcutt chronicled back in time. "In that era, in the 1930-40s, we also had the Travis-Francis Dry Good's & Clothing store, which later became Fuston's."

"We also had Hancock's Five & Dime store. Also in the 1940s, there was Banks-McAdoo Hardware, where they stored their merchandise in a back building," Mr. Northcutt added.

One of the most historically popular businesses on the Square was the Bratten-McCrary Drug Store & Soda Fountain on the Square's south side. It's no longer in business.

"Doug McCrary was a fun-loving gent, who rode horses, and actually taught school at the old Geedville School that no longer exists," Harrell recalls. "When he was the owner running the soda fountain, we children thoroughly enjoyed ourselves. We high school students enjoyed ourselves at his soda fountain.

"Later, the upper floor of the drug store was where CPA Sue Patrick (Mayor Patrick's wife) headed up the bookkeeping operation, after a drug company in Murfreesboro bought the drug store," Harrell accounted. "I think that company ended up having pharmacies not only in Woodbury, but also in Murfreesboro, Eagleville, Manchester and a few other stores in surrounding counties."

"We'd meet other kids in our high school days," Harrell accounted. "It was a good place to have a soda, or share an ice cream float with a favorite."

Vice Mayor Harrell described "viewing movies at the Ritz Theater for a dime, and later, a quarter."
"And Armstrong's Grocery was on the Square, where they'd hang a stalk of bananas or cured hams on a tree out front, to attract the customers," Harrell noted. "I can still taste their salt-cured hams. They reared four children there on the west side of the Square."

"One of their sons said he looked down from the store's second floor last century, and observed Cannon County's 100th birthday celebration on the Courthouse lawn," the vice mayor accounted.

No account of Woodbury Square would be complete without details of Vernie Burks Sandwich Shop & Pool Hall.
"It was a great gathering place, especially for teen-aged boys and men on the south side of the Square," Harrell accounted. "It was one of the more popular and social locations, but most ladies stopped at the front counter, not going back to the four or five pool tables. Most females ordered their sandwiches through the front counter window.
There was a time when "smoke" on the Square was a patriotic gesture.

"Mr. Burks ran a very strict pool room, with no liquor being served or allowed in," Harrell added. "And Mr. Burks had a tradition of giving new-drafted soldiers, a free pack of cigarettes when they left for the military. We had a lot of enjoyment in that old pool hall."