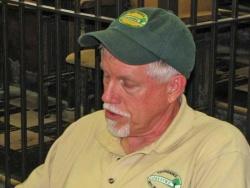 The first order of business was to approve last meetings minutes, which was held in January. David George made the motion to accept the minutes with Brenda Phillips seconding the motion, all voted aye, motion passed.

Visitors to the meeting were Joe Bryson and Chris Carney local area Foresters from the State of Tennessee; they were there to present a program on being Fire Wise when it comes to building sub-divisions.

On old business they asked if there were any concerns regarding the new Amendment on tar and chip roads for the new sub-division, there were none.

New Business, There were no new plats or site plans to review. The auction on the Hankings Property on Roach Hollow was canceled and will resume at a later date.

There were no letters of credit to review.

There was no other business.

Joe Bryson and Chris Carney of the State of Tennessee Forestry Division were at the meeting to present a learning program to the planning commission. There subject was called Tennessee Firewise Community. The foresters presented the commission with ideas and advice on how to build houses that would not be so susceptible to woods fire. This was concerning when building a sub-division.

They gave advice on how to position your house when building it to keep it from getting engulfed by leaves and flammable debris from blowing leaves where it would gather under porches or over hangs on houses. They told of how to landscape your house to keep it from becoming fuel in a woods fire. Certain flowering bushes which are popular for landscaping are extremely flammable when heated by fire even more than others due to the oil inside of them. Their presentation lasted approximately 45 minutes. There was a motion to adjourn which was passed by all present.