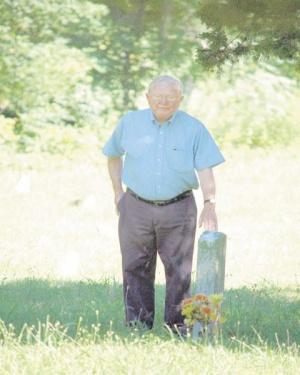 SHORT MOUNTAIN - History rests in the rocky terrain near here.

The neatly manicured Melton Cemetery sits quietly in the 21st Century, with secrets of the past securely buried deep on Short Mountain, Middle Tennessee's highest elevation point that overlooks the peaks and valleys below.
"Beautiful Short Mountain is a natural treasure," history buff Joe Davenport assessed as he conducted a recent cemetery tour. Davenport is president of the Cannon County Historical Society.

"And the well-kept Melton Cemetery is a treasure of heritage of our community," the retired superintendent of schools deposited in the banks of significant regional human history.

But, don't let the serenity of present-day Melton Cemetery deceive. The pristinely kept cemetery helped bring a peaceful end to some of the region's horrific carnage of the past. Those were the days when neighbors stalked and killed neighbors, sometimes in the name of patriotism, sometimes in personal harsh malice and greed, but all a part of the nation's inglorious Civil War during the 1860s.

The cemetery's quiet of this new century belies the majestic mountain's blood-spilled history when gunshots loudly shattered the lives of families split in allegiance to the Union and Confederacy.

Hiram T. "Pomp" Kersey, who enlisted at age 13 with the Confederate Army, is the most widely-known person buried in Melton Cemetery.

The headstone that once stood at Kersey's well-tended grave helps tell a significant part of Short Mountain's storied past: "He Died for his Country … H.T. Kersey … born Nov. 13, 1847, Joined the Confederate Army May 1861 … Associated himself with a Tenn. Guerrilla band Aug. 1863 … and was murdered near Short Mountain July 24, 1864."
A Tennessee historic marker entitled "Confederate Guerrilla" sits near Melton Cemetery's entrance off of State Route 146 between Woodbury and Smithville.

A small bouquet of plastic flowers atop the grave indicates someone in the present maintains affection and respect for the Confederate Guerrilla fighter. Family descendants of Kersey still reside in the region.

As leader of the "Short Mountain Bush Whackers," most of Kersey's wartime raids were waged on suspected Union sympathizers in the Liberty and Smithville areas of adjoining DeKalb County that shares Short Mountain with Cannon County.

His guerrilla tactics reportedly came after the home place of Kersey's widowed mother, Margaret "Peggy" Kersey, was raided and ransacked by Unionists.

History annals record that Kersey and his band of fighters were caught sleeping on July 24, 1864, when "two escaped, five were killed in the first volleys, another killed while trying to escape. Kersey tried to mount his horse, but halter was tied."

One version of published history records that Union Army Lt. Thomas Bratten "put his rifle against Kersey's back and pulled the trigger, it failed to fire. Kersey jumped into the bushes pulling out his pistol, but was shot simultaneously by Bratten and Captain William Hathaway."

History annals reflect the bodies of Kersey and associates were  stripped of their clothing and transported off the mountain on an open cart to Liberty, where they were publicly displayed before burial on a farm belonging to Daniel Smith.

"After the war, family and friends exhumed his remains from that original resting place at Liberty," Davenport shared. "Pomp Kersey was reburied in Melton Cemetery, in Cannon County, here on Short Mountain."

Jack Neeley, as a member of Pomp Kersey's band of raiders, is another legendary Short Mountain Civil War-era figure.

"While the war was still raging in the region, word got back to Neeley, who was one of those shot and killed with Pomp Kersey, that a man named Melton, a Union sympathizer, had raided Neeley's parents' farm, stealing some items during the raid," described historian Davenport. "Jack Neeley reportedly rode up to George Melton's barn during hog killing day in the Stone's River area up toward Gassaway (near today's Highway 53). When he asked George Melton if he had been in on the raid, Melton reportedly replied: 'Yes, and what are you going to do about it?'  Jack Neeley immediately pulled out his pistol, and shot the man dead!"

Neeley was known as a legendary killer of Yankee sympathizers.

"When Jack Neeley's older brother had been killed early in the war, that's when Jack vowed to neighbors on Short Mountain that he would kill at least 100 Union soldiers in revenge for his brother being killed," Davenport added.

"When he was one of those who died in the raid that killed Pomp Kersey, legend has it that Neeley had tallied more than 90 deaths of Union soldiers and sympathizers, which was near the 100 he had sworn to kill."

Melton Cemetery was one of the "first stops" on Davenport's recent trek back in time.

"We're leaving Short Mountain's history-laden Mechanicsville community, and coming upon the Wood Cemetery, in front of the Church of Christ at Wood," Davenport directed.

Cannon County's segment of Route 146 trailing over the mountain is marked with history including a bit of  "personal history" for Davenport.

"Great Grandfather William 'Billy' Wood donated the land for Wood Cemetery and the church that is still going strong today here on Route 146," Davenport noted. "The old part of Wood, where my ancestors are buried, is in the front part of the cemetery grounds … the active part of the cemetery is located back off the road, beside the Wood Church of Christ building."

William Wood was grandson to John Wood, one of the original settlers in Cannon County in the 1807-1830-era. John Wood became the first post master in Cannon County, serving the Woodville community that no longer exists. This was back in the period when Woodbury was called Danville.

This series entitled "History Lives Here" pays respects to those resting in time-hallowed cemeteries sprinkled throughout the rolling hills of Cannon County.