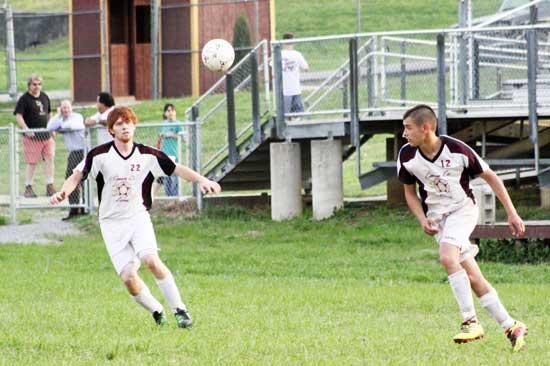 Novoa scored two second-half goals, including the game winner in the waning minutes, to key the victory. Damian Coombs also scored his second goal of the season to help key the win.

"It was a good win for us and the team, as a whole, is starting to come together and play better," Cannon County Head Coach Shannon Gannon said. "Sebastian came away with two big goals and Damian (Coombs) also had a huge goal to even the match. We were not as good as we need to be defensively and that created a lot of tough situations for Collette in goal but he rose to the challenge and came up big for the team."

Jackson County maintained a 1-0 lead at the half after dodging several Cannon County scoring chances.

It remained deadlocked until late in the match when, with time becoming a concern, Novoa came up with his biggest goal of the season when he supplied the game winner.

The win may have not been possible if not for the outstanding defensive play turned in by Collette in goal. The junior was under attack throughout but consistently came away with one big play after another to turn back numerous Jackson County scoring bids on the way to his 13-save performance.

"It's always good to feel like you contribute to the team's win," Collette said. "It was a close match so we needed to those stops, and I was just glad to be in position to come through."

The Lions have home matches against York Tuesday and against rival DeKalb County Thursday.

Following is a roundup of CCHS boys soccer games through Friday (April 8):

Kurtis Dryden scored Cannon County's only goal and Damon Collette was stingy in goal to help the Lions play to a 1-1 tie in league play, March 28.