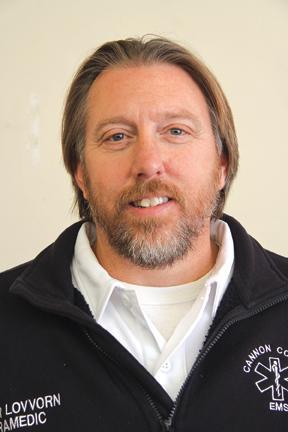 Plus, he helps keep the great Tennessee Volunteer tradition alive and well.

He must love his duty, for he's been doing it for 20 years as a fulltime emergency medical service attendant with the Cannon County Ambulance Service, but add three years he served as a volunteer paramedic.

"I never considered the medical field as a youngster, but when I began volunteering in 1991, it changed my life," Lovvorn accounted. "That's when I realized I could make a real difference in the lives of people who are hurt."

His town mayor, Harold Patrick, credits the importance of "night people, especially public servants such as police, our medical staff at our very modern Stone's River Hospital and the paramedics who make the emergency runs in our ambulances.

"I can't imagine life in our town without these vitally-important people, who volunteer to serve their fellow citizens all hours of the day and night, for that matter," Patrick acknowledged. "And I want to thank their spouses and children, for adjusting their home lives in support of the people who serve around-the-clock."

Paramedic Lovvorn admits all is not roses dealing with tragedies that seem to happen most often in the dark of the night.

"Several years ago, when my own two children (Nick and Shelby) were teenagers, I recall the awful night when two of our community's finest teen girls died in a tragic car crash," Lovvorn recalled. "Something like that, it really affects you and the whole community.

"I see people in their worst, severest circumstances," Lovvorn added in the middle his 24-hour workday on duty. "You get immune to some of the worst circumstances, but there are personal tragedies that linger with you, especially when those tragedies involve children."

Doe he think the public respects public servants who work in the wee hours of the night, while the majority of the public is asleep in their nice warm beds?

"I don't think the public thinks and appreciate enough the people who are working around the clock, for the public's benefit and safety," the medical attendant diagnosed. "As a paramedic, what helps most is a supportive, understanding family _ people you can talk with and trust _ and as paramedics, we talk and help one another when severe tragedies strike our community."

The next "night person" interview came in Smyrna in a restaurant near the massive Nissan Automotive Manufacturing Plant.

It was a dreary cold, rainy and foggy night … 24 hours after New Year's Night 2014 had been celebrated.
"It's been a very, very slow night," noted Waffle House server Jasmine Drawford at 2:32 a.m. as two workers from Nissan placed a "to go order" of hash browns and bacon on biscuits.

"There's not much stirring tonight," added 19-year-old Jasmine, who defines herself as a "night person."
"We clock in at 9 p.m., and get off at 7 a.m.," Jasmine accounted. "With those hours, yes, we qualify as 'night people.' And I enjoy those hours, actually."

"I love working these hours," she added. "But on slow nights, you get tired faster. We tell jokes to one another to make the night go faster. I guess this being a slow night, people have spent all their money and energy from over New Years and Christmas."

How "slow" was this night?

"I'm drinking half coffee and half chocolate milk, to help me stay awake," Jasmine described. "Plus, we're having family pictures made in the morning, so I've got to stay awake for that after I get off work."

Some nights are more exciting that merely serving coffee with cream, for example, Jasmine can't count the number of "marriage proposals" that have come across the dining counter from men wanting to be more than mere customers.
Some proposals come spiced with love ballads.

"Oh, on busy nights, I've had people 'sing' to me … sing love songs to me," Jasmine noted with a smile. "Some tell me they love me. And I've been proposed to more than once, you know, to get married. One guy's request was either marry him or make him a waffle. He got his waffle."

Jasmine commutes from her residence in Murfreesboro for her "night job" at the Waffle House on Nissan Boulevard.
Night cook Shawn O'Connor, 32, describes himself as a "veteran night person."

"I've been working for Waffle House as a shift cook now for eight months, but I've been working in the restaurant industry since I was age 15," noted O'Connor as he whistled a tune while flipping a piece of chicken on the grill and tending a double-order of hash browns "smothered and covered" with onions and cheese.

Asked if there's "any difference" between customers who dine in the daytime and at night, Shawn replied: "There's less intoxication in the daytime, that's for certain."

Print
Members Opinions:
[Delete]
"That's when I realized I could make a real difference in hurting people's lives." ?????? I'm sure this in an incorrect quote.
CannonCourier
[Delete]
Yep, thank you Bonnie. We have fixed it.