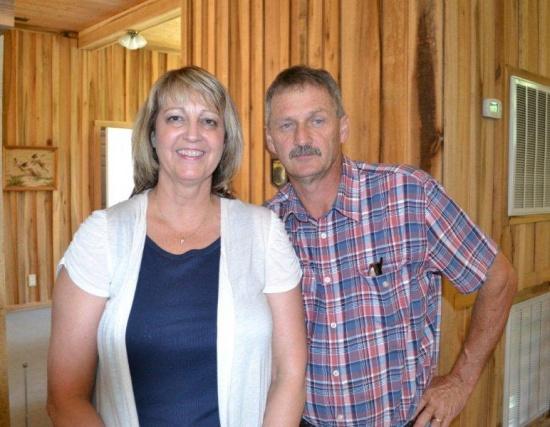 (L to R) Barbara and Grady Parker hosted the 2012 Nichols Family Reunion at The Corner in Pleasant Ridge Community.
“This is the biggest crowd since Grady and I began hosting the Nichols Family Reunion eight years ago”, declared Barbara Nichols Parker. Held Saturday, July 28th at The Corner in Pleasant Ridge Community, 125 descendents of Daniel and Sarah Melissa Vinson Nichols joined in celebration of kinship, food and family togetherness.

Daniel and Melissa were married March 1857 and raised eight children in Cannon County, TN. Third and fourth generation descendents of this couple shared childhood recollections after a bountiful noon meal.

Eleanor Nichols Bell, daughter of Doak and Rena Mai Davenport Nichols, recalled James Andrew “Pa” Nichols, was very frugal. His motto was, “If you do not have the money in your pocket to buy what you want, then you do not need it.” That belief got him the reputation of being very stingy. However, this is the same advice of today’s popular financial advisor and radio talk-show host, Dave Ramsey!

Each summer, Eleanor would leave her Pleasant Ridge home to spend a week with her grandparents James Andrew “Pa” and Martha Fann “Ma” Nichols of Hurricane Creek. Eleanor helped carry water buckets from an everlasting spring, watched her grandmother churn butter and ate hot cornbread from a wood cook stove.

Eleanor’s first cousin Linda Lou McPeak, daughter of Lemuel and Inez (Dink) Nichols Pittard, relayed “Pa” was known as a strict disciplinarian who would not put up with any foolishness. “However, he never spanked me!” Linda Lou felt her mom warned against such action and just maybe she was one of his favorite grandkids. James Andrew and his wife raised eight children on a share croppers’ income and moved a total of nineteen times. In 1934, they bought a hillside farm on Hurricane Creek that became known as the Nichols’ Holler.

Wm. Edward (Eddie) Nichols son of Wiley (Buck) and Mattie Drue Willard Nichols said he had spent the last six months stabilizing the Old Nichols House belonging to his grandparents. Built in 1850 by the Odom family; it was slipping off its foundation and destined for total ruin.

Thomas Nichols, whose parents were Wm. Richmond and Lucille Davenport Nichols, lived near the Doolittle spring where water flows from a hillside cave a few miles from Woodbury. Several Nichols’ families kept milk cold in the cave’s water. According to some recent research, Thomas reported Doolittle was originally known as Caves’ Creek.

Bobby Nichols. son of Horace Lehman and Cleo Bryson Nichols also shared family memories. Around 1916 when his dad was three years old, Lehman sneaked away from the house to be with his older brothers Alec and Clarence. They were plowing with mules near their Pleasant Ridge home. Later when Lehman’s upset mother found her little runaway, he was certain of a “switching”. However, his older brothers would not allow Lehman to leave until their mom Nancy promised not to give him a whipping.

Several reunion folks traveled long distances to attend. Joe and Faye Nichols Stucky from Peabody, Kansas, drove 789 miles. Traveling through four states in 14 hours, they visited with Faye’s brother John D. and wife Lou Ellen Nichols after reaching TN.  Joining them from the State of Michigan were the families of their deceased siblings David Nichols and Brenda Nichols Brown.

Deaths during the past year were remembered with a moment of silence. They were Carroll Wayne Nichols, Aubrey Nichols, Johnnie Bell Davenport Nichols and Gertrude Lack Nichols Vance.

The oldest man was 85 year old Ray Nichols. Ray and his wife Jean Cummings Nichols celebrated their 67th wedding anniversary on January 1, 2012.  The oldest female in attendance was Ailene Tenpenny Nichols at 87 years old. She will celebrate her 88th birthday on August 23rd.

By 4 p.m., the majority of the reunion folks had said their “good-byes.” Everyone hopes to return to The Corner on July 27, 2013, the fourth Saturday, for another joyous Nichols’ Family Reunion.