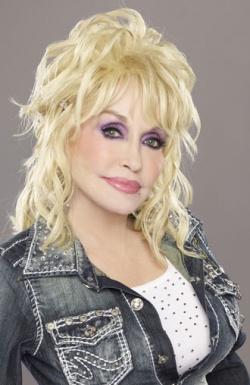 DOLLY PARTON
Effervescent country singer-songwriter Dolly Parton is so excited about what’s swirling around her that you might think she’s off her rocker.

No way. If anything she’s enjoying the limelight in the Cracker Barrel rocking chair as she promotes her two-disc DVD and CD “An Evening With . . . Dolly” that just went on sale in the restaurant that began in Lebanon in 1969 just five years after an 18-year-old Parton made her way to Nashville from Sevierville, Tenn., to begin her amazing musical journey to stardom.

“Cracker Barrel is a country store, I’m a country girl,” says Parton. “We’ve worked with them before on ‘Backwoods Barbie,’ and they do great with selling music, gospel, bluegrass, and country stuff especially.

“So we were a perfect team. For me to sit on the front porch and rock ain’t nuthin’ unusual for me. I grew up like that,” said the country legend, 66, who was dressed in a bright blue jacket and black pants and wearing long earrings, a necklace, big rings on her middle fingers, long pink fingernails and a smile wide as a country mile.

Parton says she really does dine in the restaurant as well as shop in its gift shop, but most of the time she orders take-out.

“They have like 612 stores. They’re in 42 states, and I’ve eaten in all of them, I’m sure, across the country, stopping in our buses with our band, and if I don't go in, I send somebody in.

“And every week I get stuff from Cracker Barrel. My husband loves the coleslaw and I love the cornbread muffins. Every week I have something from there. Yes, I go in there and I buy tapes, like cassettes and different things like them old radio shows. They have great stuff. It is a great pairing,” she says of teaming with the restaurant-gift shop.

So how does a major star go into a restaurant and not get noticed and what does she like best on the menu?

“I usually don’t go in the heat of the day, but there is always a lull in the late afternoon. Like around 3 o’clock is a really good time to go into Cracker Barrel. When I go, I usually order stuff to go because you don’t want to get too trapped, but I do sit down sometimes and eat.”

Besides the cornbread muffins, Parton confesses a liking to the restaurant’s chicken and dumplings.

As for other big news in the creative world of the woman behind the Dollywood theme park in Pigeon Forge (the park employs 3,000 and draws more than 2.5 million tourists a year), it’s the recent announcement of a new amusement park she will be planting near the Gaylord Opryland Resort & Convention Center a couple of years from now. She wants to clear up any misconceptions about the tourist attraction which has yet been named.

“I think everybody in Nashville’s thinking we’re gonna rebuild Opryland. It’s not gonna be Opryland and it's not gonna be Dollywood. We’re actually trying to come up with a whole new concept,” said Parton.

“The first phase is gonna be the water and snow park. With the snow park we knew we could pretty much stay open year-round with the stuff we are putting in the park. We’re breaking ground this fall and gonna have it open hopefully by spring of 2014. Then we will by that time have other stuff that we’ll be announcing that is going in it.”

She says there will definitely be places for music in the park but there are no specifics. And she is glad that the project will be bringing hundreds of new jobs this year, and many more once the park is up and running.

“We’re not sure if we’re gonna do something like an aquarium or a huge roller coaster. It’s gonna be something where we can draw as many people, and we are providing some good jobs that people need right now. In the first phase of this we’ll have at least 500 people with the construction this fall. They say 1,500 people in the area with other people starting new businesses, whether it be campgrounds or whatever, so it’s gonna really bring some and then later on it will be more. So that’s all good, and we’ll all, hopefully, do well.”

The songwriter is not touring this year so she can catch up on writing projects that are near and dear to her, including a musical autobiography.

“I’m writing my life story as a musical and probably gonna do my life story as a movie too. That’s two separate things,” she said. “I have a book that’s gonna come out this fall, a positive uplifting book, that I’ll be donating most of the proceeds to the Imagination Library, my literacy program, and then I’m gonna be writing some children’s books, and so I’m just mainly focusing on my writing.”

However, songwriting remains her “favorite thing to do.”

“There is nothing more sacred and more precious to me then when I can really get in that zone where it’s just God and me, and I really let those juices flow, and I still get the same feeling from it as when I was young,” said Parton.

As for her evergreen “I Will Always Love You,” she says of the song she wrote for country legend Porter Wagoner “it just keeps going and going, but I’ll probably be remembered more for that than anything.”

Parton was the “girl singer” with Wagoner’s troupe 40 years ago as well as co-star of his syndicted TV show. She agreed to work with him for five years before launching her solo career. In 1974, near the end of those five years, he argued with her, not wanting her to leave his show.

“I thought, ‘He’s so stubborn, he will never listen to me. This is nothing but a heartache. So I went home and wrote the song that night out of what I was feeling in my heart,” recalled Parton.

“I took it back the next day and said, ‘Porter, sit down. There’s something I need you to hear.’ So I started singing the song, and I was emotional and he got emotional, and we were both crying. By the time I finished the song, he said, ‘OK, that’s the best thing you ever wrote, and you can go if I can produce a record on that song.’ I said, ‘OK, it’s a deal.’

“I had a No. 1 record on it and then when it was on ‘The Best Little Chickenhouse in Texas’ it became a No. 1 record again. Vince [Gill] and I had a Top-10 duet on it, but it was only when Whitney Houston took it all over the world with ‘The Bodyguard’ that it really became what it is today.

“So I always think of it as 'our song.' It just killed me when they lifted her coffin up at the funeral and when they started into that song, man, it was like you could have stabbed me in the heart with a dagger, and that’s when I broke down over her. . . . Just then I started boo-hooing, and I thought those are my words and it’s my song, it’s her song, and I betcha that won’t be the only coffin lifted up for that song to play over.

“I figure when I’m dead that will probably be the same thing. It was just overwhelming to me, but I will always be grateful and thankful to her for making that song all the things that it is,” said the amazing Parton.