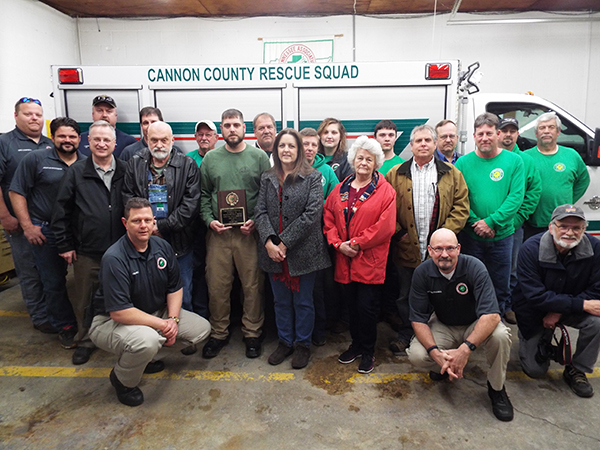 Jerry was an active member of the Amateur Radio Club and was a supporter of local and regional disaster radio communications. Jerry served Cannon County for many years as a member of the local Radio Club and he helped to promote amateur communications across the region. According to the National Association of Amateur Radio, Amateur Radio (ham radio) is a popular hobby and service that brings people, electronics, and communications together. People use ham radio to talk across town, around the world, or even into space, all without the Internet or cell phones.

Prior to Jerry's passing, he donated a radio tower to be constructed at the Rescue Squad.

"Several of us had a vision to improve the emergency radio communications between the Rescue Squad and the 911 Center," said Michael Underhill, CCRS Captain/CEO. He went on to say, "We needed a way to communicate with the 911 Center, and responders in the field, in the event that normal communications went down or if we had a large scale event where we needed outside agencies responding to Cannon County for mutual aid."

Jeff Estal, and several of the members of the DeKalb & Cannon County Amateur Radio Club, helped paint and erect the tower next to the Rescue Squad building.

In a statement, local Amateur Radio Club President Jeff Estal said, "As radio communicators, the members of the DeKalb & Cannon County Amateur Radio Club, and local Amateur Radio Emergency Services, we enjoy the opportunities to be able to practice our skills in a way that can make a difference for our community. Our friend, and club member, Jerry Elkins N4LZY, was well known for his generosity when it came to sharing his electronics knowledge and experience, or when loaning radio equipment to budding young hams. His donation of the tower to the Rescue Squad is another example of this spirit. We are glad to honor Jerry. His morning biscuit report over the radio is still missed by many of us."

Chris, Rhonda, Danny Brown and Mary Elkins accepted the presentation which will be posted above the radio console at the Squad building.

"My grandfather, the late Jerry Elkins, has been an inspiration to many, including me. He got me started with amateur radio about 10 years ago and he taught me the ways of the airways. He was always willing to help out new hams, or seasoned hams that needed help with their rig to get back on the air," said Chris Brown.

Chris went on to say, "Being in public service myself, the Rescue Squad members volunteer their time for the betterment of the community with little appreciation. They have put themselves in charge of handling and setting up this equipment, and I want to say that I appreciate everything they do for this county without compensation, it doesn't go unnoticed. Although I now have his call sign, N4LZY, Jerry will always be the original. I speak for the family when I say that we are very proud to have accepted this honor for him. We are glad to know his memory will forever live on, and that his generosity will help Cannon County as a whole."