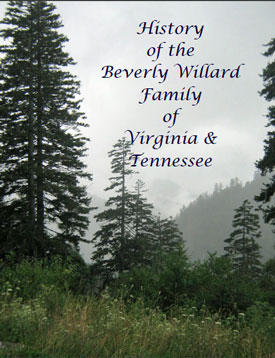 Set for release Dec. 1, the History of Beverly Willard Family of Virginia and Tennessee chronicles 250 years of American history as told through the descendants of one man, Beverly Willard, who was born in the mid-1700s and lived in Virginia until his move to Middle Tennessee in the early 19th Century.

“Willard settled in the rural area of what is now Cannon County, Tenn., before 1803,” explained Willard descendant Danny Nichols, author and history enthusiast who compiled, edited and created the narrative for the 1,435-page book. “It is more than the story of an individual, it is the story of a new country through revolution, westward expansion, civil war, industrial development, depression, disasters and the advent of technology. It is an American story of frontiersmen, farmers, patriots, moonshiners and preachers.”

Five years in the making, the publication is the collaborative effort of 50 contributors, crossing 13 generations and containing the names of more than 8,000 of Willard’s descendants. However, Nichols assures that the book is far more than traditional genealogical offerings, calling it “a true-to-life adventure,” supported by more than 200 pages of vintage photographs and hundreds of documents, letters, bible records, personal stories and newspaper accounts.

American history comes alive through stories of one young man who gave his life in 1814 at the Battle of Horseshoe Bend; brothers on opposing sides during the Civil War; a mother who defied a Union officer’s attempt to steal the family meal; a duel in Auburntown, Tenn., and the 40-year feud that resulted; 15 children and their parents who braved the wild West on a wagon-train to settle Texas; a young Texas Ranger murdered in the line of duty; a 95-year-old woman who became a legend in her hometown; and countless other stories of regular people living ordinary – sometimes extraordinary – lives.

Nichols observed that technology was crucial to the process and successful completion of one of the most comprehensive family histories written relative to Cannon County.

“The Willard family was blessed when two descendants created a strong foundational history in the early 1960s,” Nichols said, explaining how the mammoth undertaking began. “With today’s technology, however, it became more apparent that the story was much larger than what was known of it in 1963. Computers and the Internet were not available to those earlier researchers, so finding data required thousands of hours of digging through courthouses and libraries and thousands of miles of travel.”

Nichols submits that contrary to what many think such new technologies have brought families closer.

“It was through the use of the Internet that cousins began to find one another and seek answers about their ancestry,” he said, crediting a “pool of inquisitive cousins” with the idea of coordinating individual efforts toward a common goal of updating the original work.

A private, invitational-access Internet website was created for correspondence among interested group members, with as many as 50 people in 16 states and one foreign country involved.

“To become a member of the Willard project one had to agree to contribute his or her own research materials and other pertinent resources,” Nichols said. “It is the sum of that research that truly tells the story. This work represents what can be accomplished through group effort. The result is well-indexed and referenced, making it a work of quality and significance. In 1803 when the Beverly Willard family settled on Hurricane Creek, no one would have ever dreamed such a story would unfold. It is a story worth telling and a most exciting story to read.”

The History of the Beverly Willard Family of Virginia and Tennessee is being presented on DVD in two volumes in the .pdf format readable by all computers and mobile devices. It may be purchased through Dec. 1 at the pre-publication price of $25 (no shipping/handling) or after at $35 per copy. Orders are filled upon receipt at 1565 Main Street, Lynnville, TN 38472.

“The purchaser may view the DVD on a computer, choose to print the publication on a home printer or take the camera-ready files to a professional printer for creation of a book,” Nichols said, adding that 14 different covers were designed to offer choices in personalizing final printed edition.

Print
Members Opinions:
donamead
[Delete]
This sounds wonderful. I am very interested but would prefer to have the book in Hardback or Paper Back. Does the publish date of December 1 mean that it will be in print by then and where can I get it? I don't think that I want the DVD unless that is the only way to get it. I am very interested for myself as well as a Christmas gift. Donna Williams