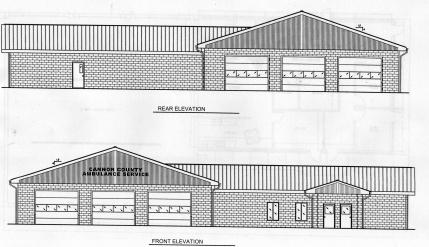 Cannon County Commissioners voted Tuesday night to file for a $300,000 federal grant that could lead to construction of a new headquarters for the Ambulance Service.

“If we are funded, if we build it, this will let us move every service to a centralized position,” Gannon said. This would include relocating the Emergency Management Agency equipment from Gassaway to Woodbury, he said.

The planned building would be large enough to accommodate 20 to 30 years of growth, Gannon said.

“Ricky Cope and I have been working on this for two years,” he said.

If the Community Development Block Grant is approved,CannonCountywill have to provide $265,000 in funds for the project. The local funding will come out of the Ambulance Service’s budget over a 10-year period.

Plans are to construct the headquarters building next to Stones River Hospital.

Print
Members Opinions:
[Delete]
Anyone interested in looking at this building can drive to Shelbyville and look at the one that was built there.

It is identical to these plans above. I believe that building was built by Preston Brothers Construction.

ftenpenny
[Delete]
Why would anyone think that teflon Faye,would give up an bring taxpayer equipment to town.That way she would not be able to use the equipment as she pleases.The only thing the taxpayers can hope for is a Grand Jury Inditment.