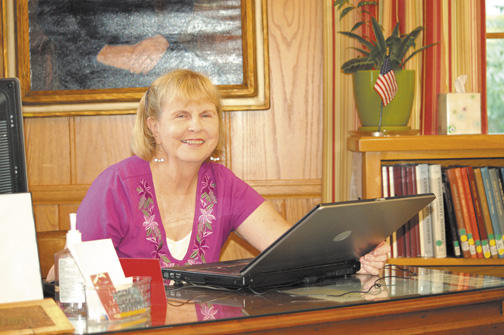 Peggy Tate is always ready to help with a search.

Pick a grave … any grave.

Meet Peggy Tate, a "go to" resource when it comes to records of deceased folks buried in the approximate 200 cemeteries sprinkled along the historic trails of Cannon County.

Her office can be found at the Cannon County Historical Society's "Genealogy Room" as part of the tastefully-expanded Adams Memorial Library in Woodbury.

Mrs. Tate was immediately put to the test by a recent visitor at the library … "Can you give me the location of C.L. Vickers' grave?"

No problem for Cannon County's recognized "Cemetery Record Lady." Remarkably, she performs her dedicated and tireless volumes of work without pay.

"C.L. Vickers was born in 1945, the son of Charlie and Veral Ferrell Vickers," Mrs. Tate shared as she browsed through the library walls lined with burial and death records. "Mr. C.L. Vickers died April 24, 2001, and is buried in Thyatira Cemetery over in the Bradyville community. He was married to Sandy Lancaster Vickers."

Thyatira Cemetery is a name out of the Bible. As ironic history would have it, C.L. Vickers was Thyatira's caretaker before he was laid to rest there by employees of Smith Funeral Home.

"Thyatira is one of the more unusual names for our cemeteries," verified Smith Funeral Home Director Tim Gentry.

"Can you direct us to the 'Negro cemetery' as it was identified in an old obituary in the newspaper?" was the next challenge posed to Mrs. Tate.

This writer's attention to this cemetery was triggered by a 1936 obituary from the annals of the Cannon Courier kept at Adams Library: "Two of Woodbury's honest and most reliable old Negroes passed away this week. On Tuesday at 5 p.m., Uncle Andy Woods, as he was known to all his white friends, died at the ripe old age of 85, after living a peaceful and quiet life. He had been employed at Downing's Café for the past several years.

"On Wednesday at 3 p.m., Dave Ward, another one of the town's most liked old southern-type Negroes, died at the age of about 70. Uncle Dave was also quiet and peaceful … and was well liked by all who knew him. He had been employed at the W.C. Houston Farm for the past several years. Both were laid to rest in the Negro cemetery."

No official name of the "Negro cemetery" appeared in the Courier obituary report of the mid-1930s-era.

Bradyville-area resident Terry Holt is the present-day caretaker of Thyatira Cemetery, a cemetery reported to be named after a historic cemetery in North Carolina.

"Wife Dale comes from the Knox and Thomas families, many of whom rest in Thyatira and the Pallet Cemetery, also in the Bradyville area," Harrell added. "That smaller cemetery with only a few markers is named for Abraham Pallet. A big marker was erected in the Pallet Cemetery in the 1990s, for Revolutionary War soldier Joseph Knox, who was buried there in 1834. He was one of six sons to John Knox."

Peggy Tate is the 21st century's version of a true Tennessee Volunteer.

"Peggy has performed all of her research down through the years, as an unpaid volunteer," verified Cannon County Historical Society president Joe Davenport, retired superintendent of schools and history teacher of Woodbury. "Everyone in the community knows and appreciates the fact that you can find Peggy Tate volunteering each Thursday at the Adams Memorial Library. She's the ultimate volunteer."

"Since I began my research back in 1997, I've missed being here at the library a total of five Thursdays," Mrs. Tate itemized.

"What I do is a labor of love. You get a special feeling when able to help grieving families with research about their loved ones," she added. "Plus, it's important community history."

Mrs. Tate is more, much more than a mere fountain of information.

"As part of my research, with record books we've sold, I was able to raise and donate $5,000 for library's latest building/expansion fund," she totaled.

And there was an abandoned, unkept cemetery in the Bradyville community.

"There's the small Bynum Cemetery at Bradyville, where I found weed growth, and cattle walking over and among the graves," Mrs. Tate shared. "I was able to finance and have a protective fence put around the graves and every two years, I pay to have the cemetery cleaned up again."

Peggy Tate is a one-woman force to ensure people of the past are not forgotten, including those resting in the most remote, isolated rural cemeteries shrouded in peaceful early-morning fogs that blanket the beautiful rolling hills and valleys of Cannon County.

Print
Members Opinions:
ewimbush
[Delete]
It is nice to know there is someone who still cares about honoring the dead and their resting place. Those who request info should be willing to make a donation to whatever fun Mrs. Tate needs a contribution.
[Delete]
Well said! Peggy Tate is to be commended on her work and interest in preserving Cannon County history and the people who helped make it. She is a valued resource for Cannon County and deserving of the recognition and accolades this story presents. Thank you Peggy for your dedicated service to the people of this county.