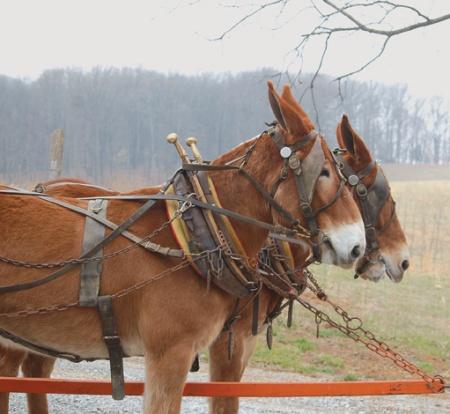 Some of the prettiest proud-stepping, lop-eared and high-priced mules in Tennessee and Southeast will be hauling tourism dollars into Cannon County by the wagon loads at the May 11 Middle Tennessee Mule Skinner's Show, planners advise.

"We can't thank (lifelong mule man/retired area banker) Bill Smith and Andy Duggin enough for their work in making Woodbury known throughout the country for our famous show-ring mules," the mayor added. "When this May 11 show is over, we'd like to encourage the interest we hear growing in our community, about the possibility of creating a permanent 'Mule Skinner Museum' here, to go along with our other tourism attractions, including the Readyville Mill, Short Mountain Distillery, plus, the Arts Center and Moon-Lite Drive-In outdoor theater, just to name a few."

Mules and the families who own them will be coming to Cannon County from multiple states.

"Dozens of prized mule teams and their wagon masters will be coming to the hills of Cannon County from throughout the Southeast, including from Tennessee, Georgia, Kentucky and Alabama," confirmed Middle Tenn-essee Mule Skinner Pres-ident Andy Duggin, of Woodbury. "Our show has evolved into the biggest one-day show throughout the south-eastern states. And after this show, we will be exploring the possibility of establishing a permanent Mule Skinner Museum in these parts. We like to encourage everyone to get out and do something that benefits our great town and county.

"Last year's Mule Skinner Show at Pemberton Arena attracted 50 mule teams, their handlers, plus the loving families who own the mules," Duggin said. "This year, from pre-show interest, we'll double the number of mules, plus, we've added single-riding mules and miniature donkey classes, which will draw interest from children and adults alike."

What's a good pair of matched mules cost in the modern market?

"Two of our own Cannon County Mule Skinners, Mike Pemberton and Buddy Black, have each sold a matched-pair of mules for $10,000 in recent times," Duggin noted. "It's no small-time industry, and it's growing throughout the nation, as evidenced by the huge turnout here each year, and the gigantic turnout they have each April for Mule Days at Columbia."

"Mule Skinner Buddy Black has served as Columbia Mule Days' Parade Grand Marshal now for 33 consecutive years, which tells you the respect that our Cannon County mules have throughout the nation," Duggin accounted. "Plus, on May 11, Buddy will be showing his current prized matched team, 'Pam' and 'Pat.' Two of the prettiest mules you'll see in these parts."

What is a "mule skinner?"

"It's not what you think," defined Danny Fraley, a card-carrying Mule Skinner from Rutherford County. "A good pair of mules is smarter than horses. So you have to be smart to get a team of mules to do the labor you need them to do, thus, you 'skin' (out-think) the mules into doing their jobs."

Fraley and mule man Lytle Hodge of Smyrna will show a team of mules named "Lucky" and "Leroy" at the Saturday, May 11 show, when the gates are set to open at 11 a.m.

"It's a free show, open to the public, for we want grandparents and parents to bring their children, to educate them on the importance of mules that did the hard labor that helped establish modern-day America," Duggin added.

"For example, it was mules that did the earth-moving work that resulted in construction of the first major paved boulevard between Woodbury and Murfreesboro back in my childhood," added Smith, age 94 and a founding member of the Mule Skinner Association.

Show-ring prepping of the animals began weeks ago.

"We've been grooming, feeding extra to get our mule team show-ring pretty with their shining coats for the big May 11 show," Fraley advised. "The mules have already started getting frisky on their own. They like the attention each year about this time for the big Middle Tennessee Mule Skinner's Show on May 11."

Currently, the Woodbury-based Middle Tennessee Mule Skinner's Association has 60 families, comprising a membership from throughout the Southeast.