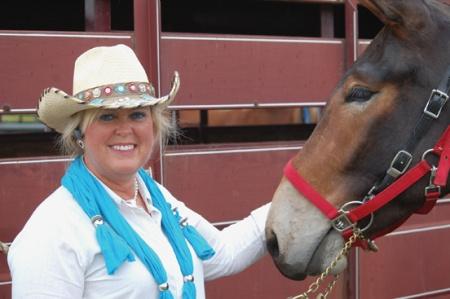 Mule lineage dating back to the 1800s rolled into the Cannon County Fairgrounds from Rock Island, Tenn., with the arrival of 17-hands-high mule Kit, and pulling mate Jane, belonging to father/son owners Greg and Clint Powers.

"Great Grandfather Sidney Powers came into the Cumberland Mountains, up in the Rock Island area, in the late 1800s, with seven sons and 100 mules," Greg Powers traced mule and family lineage back across three centuries.

"He was considered a very wealthy man, owning that many mules," echoed great-great grandson Clint. "Grandpa Sidney, his sons and mules helped clear timber, working for the Rocky River Coal & Lumber Co. And Grandpa Jim Powers, to this day up in his 80s, still can drive a team of mules where we live up at Rock Island…"

"Last year, we had 50 teams of mules," Woodbury resident Duggin accounted. "We more than tripled that number today, with mules and proud owners coming into Cannon County from multiple states…"

Fourteen-year-old Haley Shultz, of Smyrna, beamed proudly when she and a mule named "Angel" came in second in the afternoon mule-driving-wagon competition.

"It's the first time Haley had driven in competition, so we're very proud of her and Angel," noted proud mule owner Coy Ricketts of Rutherford County.

As mule enthusiasts and owners began gathering early, talk began circulating about a possible mule museum to be located somewhere in Cannon County in the future.

"Woodbury has been the epicenter of mule breeding, sales and development for a long time," testified lawyer Doug Aaron, a Mule Skinner member from nearby Manchester. "So yes, a history-preserving museum would be in order at the mid-state's epicenter of present-day mule industry…"

Cannon County mule man Mike Pemberton, who recently sold a pair of mules for $10,000, echoed that sentiment: "It would be a proud day, to showcase the history of our mules that helped settle not only the Upper Cumberland region, but our nation before the advent of engine-power."

Cannon County Fairgrounds' Pemberton Livestock Arena is named after his late son, Justin Pemberton, who perished in a 1989 car wreck.

"A Mule Skinner Museum's time has come, as evidenced by the turnout and interest shown here today at obviously our biggest one-day mule show in history," Pemberton added. "The museum needs to be done quickly for some of the legendary mule men, such as the late great Jack Stroude have already passed on.

"Jack, a black gentleman, was known as a top mule-trainer, and worked with current legends in our industry, such as Buddy Black and Bill Smith, the two most well-known mule men of our time," Pemberton acknowledged.

Former Cannon County Chief Deputy Sheriff Black, at age 84, was found enjoying the show, seated in the stands along with Smith, age 94.

"I often worked mules with Jack Stroude," Black confirmed. "At our peak, Jack and I could work up to six mule teams each at one time, keeping them all under control…"

When a spectator asked Black "the changes" he's seen in the mule industry over decades.

"Lord, Lord, I've seen the times when you couldn't get anything for a good team of mules," Black accounted. "Now, today, you pay a pretty penny for a good matched-pair of mules…"

"I began working around mules at age 4, when my dad (Hillard Seal) began the last plowing of our corn, before laying it by that crop year," Seal sailed back across the centuries. "Dad didn't like mules, so as long as they got us through the field, anything was OK with him. Those first mules, named Mandy and Matt, probably knew more what to do than we did."

The show could not go on, without mule enthusiast volunteers, such as Cannon Countian Jimmy Simpson and Rutherford Countian Danny Fraley as they worked Simpson's prized Sorrell mules Belle and Pearl in pulling the "drag" that smoothed out the arena's show-ring floor.

Simpson and Fraley can often be found far and wide, providing wagon rides, showing in parades and at field plowings up at Short Mountain Distillery, one of the main sponsors of Saturday's record-setting Middle Tennessee Mule Skinner Show…