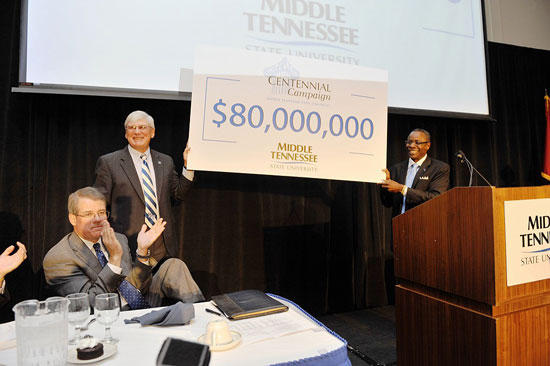 Nearly $54 million already has been committed toward the campaign’s $80 million goal. Raised over the past three years during the “quiet phase,” the $54 million alone would constitute a successful effort at many comprehensive universities.

Highlighting the campaign’s public launch was the announcement of a $10 million gift—the largest outright gift in the school’s history—from alumnus and entrepreneur Andrew Woodfin “Woody” Miller of Nashville.

Miller, who provided the six-figure final boost for a fundraising challenge for the University Honors College a decade ago, made a point of telling MTSU President Sidney A. McPhee then that he planned to make an even larger donation to MTSU.

“This gift is going to go a long way in helping this University continue to do the incredible job it has done for 100 years, and now, for the new century, it positions us in a very significant way to continue to make the kind of progress that we have mapped out for the University’s second century,” McPhee said.

According to McPhee, the $80 million capital campaign will ensure the University’s place among the nation’s top comprehensive universities, further raise its visibility nationally and internationally, and maintain MTSU’s legacy as a center of higher-education excellence for the future.

Pamela Wright, founder and CEO of Nashville-based Wright Travel and an MTSU alumna, is serving as chair of the Centennial Campaign.

“This is an exciting time for MTSU, and I am so proud to be an alumna,” Wright said. “As we near the end of our Centennial celebration, I’m even more excited about the opportunity to look ahead and to begin to think and do something about the future of Middle Tennessee State University. That’s what this campaign is all about.”

Carol Hudler, president and publisher of The Tennessean;

Though it has its own organizational structure, the Centennial Campaign is supported by the MTSU Foundation, which has been working hard behind the scenes for more than three years to raise the $54 million in hand privately.

Joe Bales, vice president for development and university relations and executive director of the Foundation, described Friday’s public announcement as the “capstone of the Centennial celebration” and said it would provide the University with a “roadmap for the next 100 years.”

McPhee said financial support from alumni, friends and the community has become a vital component of MTSU’s rich heritage, especially during a period of declining state support.

“Today is special for us, for it is safe to say that MTSU would not be what it is today without the leadership and generosity of our donors and friends,” McPhee said. “Demands on state resources and resulting reductions in funding for higher education make philanthropy a top priority for the University. As we enter our second century as an institution of higher learning, it is imperative that we boldly look at the opportunities that lie ahead.

“As we look with anticipation to our future, we will outline today how we hope to inspire our philanthropic partners to join us in building an even stronger university.  These investments are necessary to secure our role as a leader in public higher education, not only in Tennessee but across the nation.”