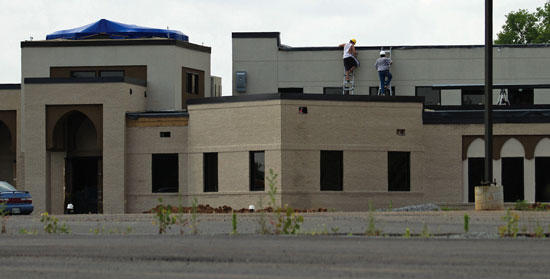 Despite an on-going legal battle, construction on the Islamic Center of Murfreesboro continues. (File photo)
Residents have launched Rutherford County into the national spotlight with their reactions to a mosque currently under construction along Bradyville Pike. While judges and plaintiffs battle about public notice, the ongoing attention could be jeopardizing to the community’s future economic development.

In the past, Rutherford County and its municipalities have received national recognition for quality of life, growth and education.

But recently, the area is receiving national attention of a different kind. For the past two years, a spotlight has shone on Rutherford County regarding an ongoing court case surrounding the construction of the Islamic Center of Murfreesboro and the planning commission’s handling of public notice of the May 2010 meeting when its site plan was approved.

Chancellor Robert Corlew III ruled three weeks ago the Rutherford County Planning Commission did not provide adequate notice to residents. He did not order construction of the mosque be halted, but he did announce that a certificate of occupancy will not be issued.

“People are moving here, and (there is) increased economic impact year to year from tourism,” he said. “We’re doing something right. These positive rankings do nothing but help to brand us as a good place.”

That said, Latture added, anyone with access to the Internet can learn of a community’s positive and negative attributes.

“Every community from time to time faces some adversity and/or controversial issues, and it’s always incumbent that the Chamber of Commerce, as well as community partners, continue to expound upon the positive attributes that have made our community successful and will continue to make it successful over the years,” he said.

The Bradyville Pike Islamic Center should have remained a local issue but skyrocketed to a national level because of its timing with plans to build a Muslim community center in lower Manhattan, near Ground Zero in New York City, Vanderbilt professor sociology Richard Lloyd said.

“It sort of shone a light on what was happening here that wouldn’t have otherwise happened,” he said, adding the issue also gained momentum as political opportunists used it to sway voters.

“Unlike New York City, which is the most cosmopolitan city in the world, Tennessee does not have a long history of receiving this kind of immigration, or for that matter, much of any type of immigration.”

Historically speaking, the South’s conflict has always been black and white, Lloyd explained. However, over the past 20 years, the region has seen a steady stream of Hispanic immigrants, and more recently, an influx of African, Asian and Middle Eastern natives.

Because the addition of new cultures was such a small portion of the rural population, it wasn’t perceptible that these population changes were taking place, Lloyd continued. The proposal of a mosque announces, seemingly out of midair, the arrival of this population.

“Where in New York City, this style of immigration has been going on for decades, here in Middle Tennessee, people feel like it’s happened all at once,” he said. “People perceive change in the sense of very rapid change.”

“Churches or places of worship really do embody demographic change. We certainly should have expected for people to be concerned about or interested in trying to understand it,” he said.

Lloyd points out that despite any and all controversy, “the U.S. has been more successful than any nation in the history of the world at accepting different groups and assimilating them, and the truth is, the U.S. Constitution has been resilient in this case, as in others, because attempts to slow construction of the mosque have succeeded, but attempts to stop construction have not succeeded.”

Political climates surrounding a number of proposed mosques around the country amplified what otherwise should have been a local issue, Lloyd highlighted.

“Of course, it does feed into the stereotypes of the South, as well. There’s no getting around that,” he said. “People around the rest of the country can easily put Murfreesboro in a box in ways that are quite unfair. To some degree, residents of Murfreesboro have been victimized because of political opportunism and climate outside of their control. … I suppose I always want to defend the community of Murfreesboro a little because I think that the nature of the way these things are covered, particularly in electronic media, amplifies the extreme voices that don’t really represent the community as a whole.”

The controversy surrounding Rutherford County can potentially impact its future economic growth. Some corporate decision makers could see the community as an unnecessary risk that should be avoided.

“There is a body of scholarship out there … that suggested that for certain kinds of workers and associated industries, particularly in high tech areas, they are interested in places that have high degrees of tolerance because those nurture creativity,” Lloyd continued.

He cited economist and social scientist Richard Florida’s Three Ts to Economic Development: technology, talent and tolerance. Companies that recruit employees from other countries are going to be concerned if they can’t make a home in a new community.

“I suppose it could be a deterrent … if Murfreesboro becomes a synonym for lack of tolerance and lack of openness, which again, I think is quite unfair to a community which has a major university and which is diverse and which I think is being misrepresented,” Lloyd concluded.

He also pointed out that while such controversy may not matter to companies providing manual labor, it could be a huge factor to companies seeking to relocate employees with advanced or college degrees.

Additionally, companies looking to establish retail or sell a product may not care about controversy in a given community, says MTSU professor of management John Mullane.

He agreed that the biggest factor from a strategist standpoint is to avoid controversy or conflict. They don’t care if a mosque is located within a community, but they do care about controversy surrounding it.

“Our  (situation) seems to have a theme running through it … it seems to me we have people here who appear to simply be against Islam and the presence of it, which is quite different from (architectural complaints),” Mullane said, adding that a community with bias could deter potential development.

That said, if a company sees Murfreesboro as the best place to locate a business based on cost, incentives and other factors, “it certainly isn’t going to keep a company away.”

Dave Sabathne, president of the Western DuPage Chamber of Commerce in the suburbs of Chicago, says he’s never had a member decline to join or leave membership because of controversy surrounding a proposed mosque.

The DuPage County Board recently turned down plans for a mosque and worship center because of anticipated traffic and septic issues in a residential area.

Sabathne added that business is business, and the bottom dollar is of most concern to company leaders.

“You’re never going to be short of somebody who doesn’t want something built … that’s pretty typical everywhere you go. But in terms of a business perspective, (companies want to know) are they going to spend money? Do they have the skill set that I need as an employer?” he asked.

If a community can meet those two requirements, having a mosque located in the area isn’t a factor.