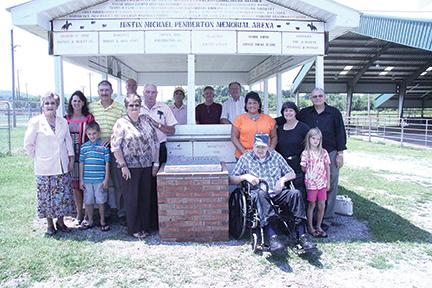 Former Cannon County Commissioner Joe Wimberly loved the Clayton Glenn Arena and even played a part laying it out.

A monument has been erected on the property of the horse arena in memory of Wimberly, who served 20 years as District 4 Commissioner and worked for the Cannon County Litter Control Program until his retirement in 2008.

The monument is a beautiful marble stone set on bricks that were laid by Daryl Fisher. The bricks were donated by Preston Bros. Construction. It reads, “In loving memory of Joe Wimberly. Joe was instrumental with the planning of this arena. He worked tirelessly to ensure equine lovers of Cannon County would have a permanent show ring to exhibit their beloved horses. His dream was to provide a location for the cherished and honored tradition of horsemanship in Cannon County.”

Wimberly’s wife of 50 years, Baunita, said her husband would be honored by such recognition.

“I am proud of the monument and dedication to Joe,” Baunita said. “Joe would love it and would be honored. I was so excited when they called to tell me about this. Joe worked the inmates at the jail and they did such a wonderful job. They were down there (at the arena) daily and did so much work on that. Joe loved horses and horse shows. He and Clayton Glenn did so much out there.”

The dedication took place Aug. 10 and was attended by several family members. County Executive Mike Gannon came up with the idea for such recognition.

“Joe was a special friend to me,” Gannon said. “When Joe became a county commissioner he and I served together for several years. When the (old) football field became available due to the new high school, Joe and I presented an option to the County Commission to make that a permanent horse arena.”

Upon the Commission’s approval, Wimberly and Glenn came up with a lay out for the arena.

“At that time Joe was over litter control and worked the inmates,” Gannon said. “He spent a lot of time laying it out and keeping it up, just making sure everything went well. If anybody deserves recognition for what he did, Joe Wimberly does.”

Baunita Wimberly said the monument was a fitting tribute for her husband, who died Dec. 9, 2010.

“(Joe) loved his county and the people in it,” Baunita said. “He enjoyed doing for others. He was a people person and wanted what was best for the people of Cannon County.”

The monument is located at the entrance of Clayton Glenn Arena. It says:

I, Joe Wimberly, would like to announce that I am running for re-election as the Cannon County Commissioner of the 4th District.
I have been married to Baunita for 50 years and we have two children, Sandy Alexander and Randy and Terri Wimberly. We have one grandson, Dan Wimberly and we are members of the Church of Christ.
I retired in 2008 from the Litter Control Program, which consists of using the inmates to pick up litter over Cannon County.
I promise to continue to serve Cannon County to the best of my ability to help make it a safe and prosperous place to live.
I am proud to have served as the 4th District Cannon County Commissioner for 20 years. I would appreciate your vote and support in the August 5th election."