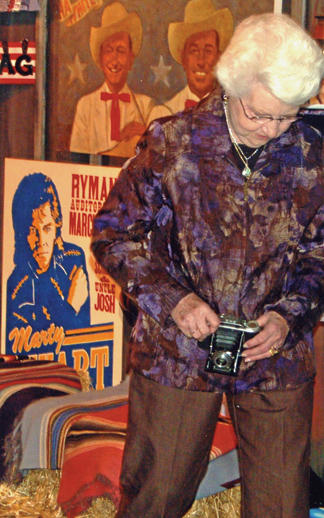 Hilda and her new book - "Choctaw Gardens" - will be at the nationally-acclaimed Arts Center of Cannon County for a book signing the evening of April 15, from 6 - 9 p.m.

"It's a special, one-of-a-kind cultural event," promised Arts Center Executive Director Evin Hatch. "We thought this might help folks get income tax details off their minds on that date…

"We're honored to have the author, her book, and the Tennessee Mafia Jug Band, featuring banjoist Leroy Troy, here for the evening," noted Hatch. "Plus, there promises to be some very, very special mystery music-making guests from the Grand Ole Opry on hand that night for the pleasure of the viewing public."

Appropriately, Hilda's pictorial book was published earlier this year at Oxford, Miss., since she and husband John reared children Jennifer and Marty at Philadelphia, Miss., before the family moved to Nashville in the 1970s as Marty pursued his entertainment career.

Retired Murfreesboro banking executive Hilda shared what it was like to let young Marty leave Philadelphia at age 12 to appear on the Opry with Music City legends, the late Lester Flatt and Earl Scruggs.

"Even as a small boy, it was evident Marty had a gift for all things music-related," Hilda said. "Some family members didn't understand why or how we could let Marty get on that big Greyhound bus bound for Nashville and the Opry.

"But close family and friends realized Marty was destined for a music career," Hilda added. "I have a theme in a safe deposit box that Marty penned in the 6th grade, outlining his life, his career, even detailing that one day he would marry Connie Smith."

The photographer "focused" on her motivation to take pictures as a little girl in southern-most Mississippi.

"It was a family baptizing that I failed to have a camera at. My granddaddy was a good fellow, but had never been baptized," Hilda shared a "snap shot" back in time. "That's when my grandmother, who had a limp from severe arthritis, decided to be baptized too.

"As they helped Grandmother down into the water, she had let her hair down _ and just as the preacher put his hand up to baptize Granny, there was a cloud came over, and the light shined brightly on her head and beautiful hair that glowed _ although it was a hot July, I had a chill when that happened.

"That's when I resolved to never be without some kind of camera," Hilda confirmed now at age 80.

Her first camera was a simple Brownie Hawkeye borrowed from a brother back in Mississippi. She still takes pictures with an antique Ansco camera behind the stage at the Opry and during taping episodes of the "Marty Stuart Show" - the highest rated program on the national RFD-TV Network.

"Mother has always shot with whatever brand of camera happened to be at the house," shared creative son Marty. "She still takes better pictures with her simple cameras than I do with my expensive fancy camera."