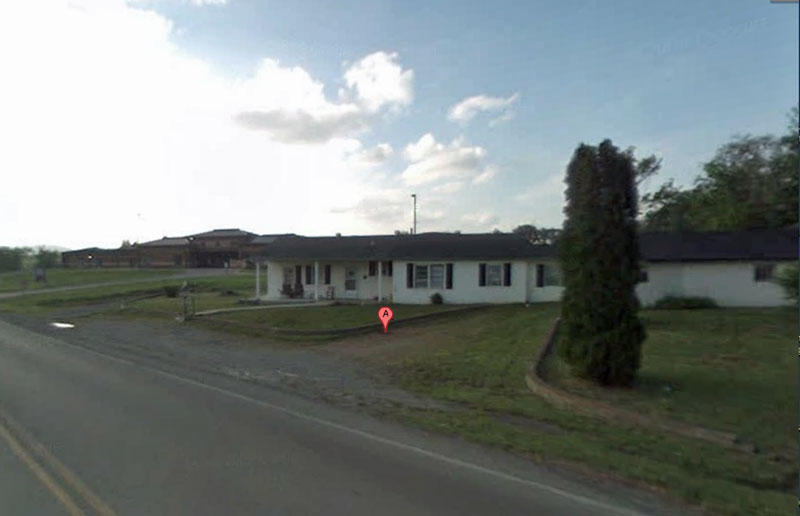 The "A" marks the spot where Google Maps indicates 516 West Adams St. is located. Woodbury Grammar School is in the background.
Another religious organization is on the hot seat and is being questioned for possible violations of zoning laws here in Woodbury.

The subject was brought up under new business at the Town Of Woodbury Planning Commission's monthly meeting Tuesday night at City Hall.

Wes Frazier, President of Captured By Grace Ministries, approached the commission last year at its March and April meetings to ask the planning commission to change the residence he purchased at 516 West Adams Street from being zoned residential to a commercial zone.

Frazier said he was planning on using the residence as a domestic violence shelter, taking in abused individuals and also people who are homeless. The zoning request was denied. There were concerns that the shelter was too close to Woodbury Grammar School.

After being denied the request Frazier stated he would use it as a church instead. Now, according to Woodbury officials, there are numerous reports that the house is being used as a domestic violence shelter to house abused victims.

Mayor Harold Patrick requested that Planning Commission Chairman Jimmy Barrett write a letter to Frazier to have him attend the January meeting Tuesday night to answer as to why he was using the residence as a domestic violence shelter or show proof he wasn't using it as a safe haven for abuse victims.

Frazier then got in contact with Mayor Patrick and informed him that due to prior obligations he would not be able to attend the January meeting and requested to be rescheduled to the February meeting.

Mayor Patrick then corresponded by letter stating that the commission would not agree to a
continuance unless Frazier assures it in writing that Grace Ministries will not be operating a domestic violence shelter during this period of time.

In a response to the letter, Frazier writes, "We are NOT and have never been. This is a false accusation.”

Frazier goes on to write that, "I am requesting in writing that all that have accused and filed a complaint against the Ministry be present. Also all copies of the sworn affidavit's be given to me at the meeting on February 21st 2012 for my record and future use."

Woodbury City Planner Shannon Copas will research the Town of Woodbury's zoning codes. He advised that this may be an issue for the Board of Zoning Appeals to rule on instead of the planning commission. The matter will be looked into more intensely in February.

No other business was brought up before the Planning Commission Tuesday.

[Delete]
It's a safe house not a drug house so.What is the big deal here you cry babies???Its a safe place for people that needs a roof and to be safe...I guess the city of Woodbury and you cry babeies would like these people to live out on the street with thier kids...And you people call your self's god fearing christens yall are nothing more than 2 face hypocrites for being agaist a safe house to help others in need...Jesus said help those who need help and bless them...But you peolpe and the town of woodbury have turned your backs on the very people Jesus said to help in thier time of need...You all will half to answer for this in front of GOD...
[Delete]
The "big deal" if it is a safe house for victims of domestic violence is that the people who commit the crime will often continue to stalk and attempt to harm the victim(s). If they find them at a home which is close to a school the potential for collateral damage is increased. It is a serious public safety issue, not one of helping or not helping people in need. The Town of Woodbury has consistently helped the local domestic violence agency through yearly contributions.
junebug18
[Delete]
I agree with kevin about the abusers going after the victims. But if this was a safe house then the cover sure has been blown and all those looking for their victims know where to check now. The purpose of a safe house is for it to be secret to protect the ones who are there. I do agree with one thing---there seems to be a "witch hunt' going on now in Cannon for ANYTHING that seems to be assisting people under Christian values. OR maybe some people just need some drama in this small town??
[Delete]
junebug18, could be you are reading more into it than was ever there. The Spring 2 Life neighbors would likely be opposed to a home for recovering addicts if it had no religious affiliation, and the Town of Woodbury would feel the same about any organization (religious or not) housing domestic violence victims in any home next to a school.
Cin
[Delete]
Thank you Kevin, that is exactly how the neighbors of spring2life would feel.
junebug18
[Delete]
The thing is, no one is supposed to know where safe houses are located except the domestic violence staff, the victims, and hopefully the police. IF this had been a safe house, look at what damage it could cause to the victims. I do agree with one thing. Anything new, religous or secular, will always be opposed here just because it's new and different. Just a sad situation all around. On both sides.
[Delete]
It was to be so safe that after it was denied zoning as a safe house Frazier said it was going to be a church. Maybe he didnt want the city officals to let his secret out or he thought this is Cannon county and i can do what i want.

Kevin has said it all in his two statements.