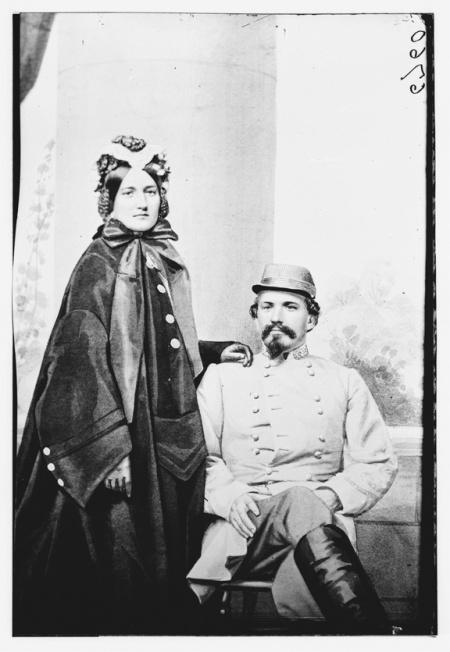 By SHIRLEY FARRIS JONES/Special to The Courier

It isn't often that I find myself getting excited over another woman's "old" dress, but I must say there are exceptions. And, a dress belonging to my very favorite 19th century female persona is indeed that exception beyond all others.

This particular "old" dress belonged to Martha "Mattie" Ready Morgan Williamson, Murfreesboro's own Southern belle, a lovely, smart, and spirited young woman, the epitome of grace and elegance- and fashion.
This dress was recenty found languishing in an attic in Lebanon until some descendants of uncovered the treasure.

Recently, descendants of Mattie Ready's son and his wife, Charles Ready and Mary Campbell William-son, decided to sell "Camp Bell," or "The William Bowen Campbell House," as it was known in Lebanon, and where five generations of this family had lived for more than a hundred years.

There were a lot of things they wished to liquidate, among them the box containing "Mattie's Dress" plus several special undergarments.

They contacted Aimee Lester, the liquidation coordinator of Lester Estate Liquidators, who, upon realizing that these were actual belongings of Mattie Ready Morgan Williamson knew they needed to be in a museum to be shared with all of Mattie's admirers. She immediately contacted her good friend Margie Weatherford who recognized the value and opportunity of obtaining these items.

As Margie stated, "Because of the cost, the purchase would have been time consuming and difficult for Oaklands to make, and I did not want to take a chance on losing everything. … So I bought it and turned it over immediately to Oaklands. I felt like this was one chance in a lifetime to obtain Mattie Ready's clothing for Murfreesboro."

Of course, Oaklands staff is excited, and as a great admirer of this extraordinary woman and "Honorary Ready Cousin" I too am thrilled beyond words over this generous and once-in-a-lifetime donation by Margie and Ben Weatherford.

These fine garments will be on display beginning July 12, as featured items in Oaklands' summer exhibition, "Whispers of the Past: A Museum's Secrets Explored," which will run July 12- Aug. 11, 2013.

Thank you to the Weatherfords for this priceless donation, allowing Oaklands to share a little piece of history with our community.

Mattie's Story
Born into an upper-class, aristocratic family near Murfreesboro on June 21, 1840, Martha, who would affectionately be known as "Mattie," was the sixth of eight children and the second of four girls, of Charles Ready Jr. and his wife Martha Strong Ready.

Mattie was described as being a "very attractive young woman of medium height, with a shapely figure, a fair, creamy complexion, large blue eyes, and dark hair."

She attended the very prestigious Soule College in Murfreesboro and the Nashville Female Academy during the 1850s where it was noted that young ladies could receive "traditional Southern education for women in cultural studies and social graces."

Her father was a very successful Murfreeboro attorney, twice mayor of the city in 1832 and then again in 1849-1853, and a very influential member of the Whig party. He served Tennessee as a United States representative before the Civil War and a judge afterwards.

While in Washington with her family, Mattie was known to be a favorite among society. She was "the first girl in Washington to wear a curl on her forehead, which was soon imitated by a hundred others," and was described as being one of the "prettiest daughters of Old South society and a fashion trend-setter at 18."

Her good taste and sense of style was part of who she was, and continued throughout her lifetime.
In late February 1862, Mattie met the love of her life, a dashing, daring cavalryman from Kentucky, "her General," John Hunt Morgan. They became engaged, according to family legend, on March 19, and were married at her home in Murfreesboro on Dec. 14, 1862, in what was described as "the social highlight of the Confederacy."

It was an intense love affair on both sides, and would change both of their lives forever. Their marriage lasted only 630 days before Morgan was shot and killed in Greenville, Tenn., on Sept. 4, 1864.

Mattie had left Murfreesboro just after the Battle of Stones River in January 1863 a blushing bride, very much in love, and despite the hardships of war, happy to be with her beloved husband. She returned home to Murfreesboro in June 1865 a grieving young widow with a two-month-old daughter, having lost her husband and her first-born child.

During this two-year period, her home, her family, and the life she had previously known were forever gone.
Mattie remained a widow for about eight years, living at her parents home across from the Rutherford County Courthouse, devoting her time to raising her daughter, Johnnie Hunt Morgan.

She was remarried on Jan. 30, 1873 to Judge William Henry Williamson of Lebanon, a one-armed Confederate veteran and friend of both her father, and sister, Alice, and her brother-in-law, Andrew B. Martin.
At this time, Mattie was 33 and her new husband was 45.

Despite Judge Williamson's duties as Circuit Court Judge in Lebanon, Mattie continued to live in Murfreesboro. Their first child, William Henry Jr. was born on Nov. 8, 1873, and soon after Mattie, Johnnie and baby "Henry" went to live permanently in Lebanon.

In late May 1878, child No. 4 arrived, Alice Ready Martin Williamson, and the fifth and last child, Nannie Williamson, was born on May 28, 1881. Mattie was almost 41 years old by this time, having given birth to a total of seven children, the first and last dying in infancy.

Cause of death was probably tuberculosis or, possibly, typhoid fever, which had claimed the life of Judge Williamson on March 16, earlier that same year.

Upon Mattie's passing, her things were divided among her children - including one special dress that went to this son.

The dress was carefully packed away, and marked as "Mattie's Dress," where it remained for decades, almost 136 years after her death.

Now it has returned home to Murfreesboro.