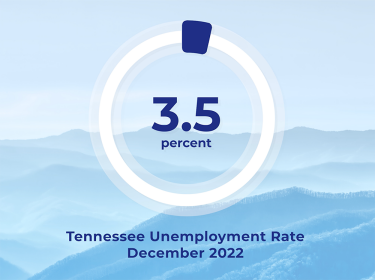 Tennessee ended 2022 with continued low unemployment across the state. The seasonally adjusted rate for December came in at 3.5%, which was unchanged from November. For the entirety of 2022, the statewide unemployment rate reached a low of 3.2% and never went above 3.5%.

In a year-to-year comparison, the statewide unemployment rate is down 0.1 of a percentage point from 3.6% to 3.5%.

Over the year, Tennessee's businesses helped the state's economy grow with an increase of 104,800 new nonfarm jobs. The education and health services sector experienced the largest increase in new jobs, followed by the trade, transportation, and utilities sector, and then the leisure and hospitality sector.

An in-depth analysis of the unemployment and labor force data for December can be found here.

Nationally, the seasonally adjusted unemployment rate decreased slightly when compared to November, down 0.1 of a percentage point to 3.5%.