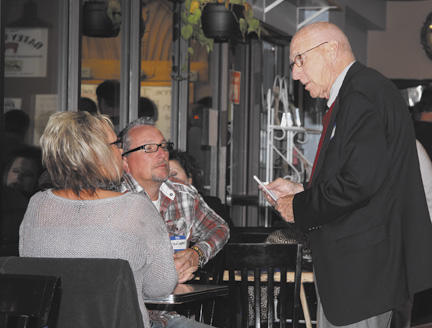 The event, sponsored by the IDB and the Cannon County Chamber of Commerce, was held at The Blue Porch Café at the Arts Center of Cannon County. Representatives from 15 local industries attended ranging in size from Cannon County Woodcraft's two employees to Cannon County Board of Edu-cation's 350 employees.

Emphasis was on the quality of work produced by Cannon County employees.

"GIC started business by faith in my garage," Toledo said. The company's first move was to Woodbury and into the old Colonial Shirt Factory building which had a leaky roof. By 2007, the company was growing fast enough to be named to Tennessee's Hot 100 businesses.

In 2012, Global was a recipient of the Governor's Award for Trade Excellence. Located in Woodbury, the company designs and manufactures a variety of metal products. GIC has established a trading company in China and has hired a vice president of sales for Latin America with hopes of establishing a full model in Mexico.

Beginning with Gerald and his wife, the company now employs 35 in Woodbury.

"All roads lead to Woodbury," Toledo said. "That is our motto" as the company continues to grow with facilities in China, South Carolina and Mexico.

Following through on the topic of Cannon County, Sue Conley, CEO of Stones River Hospital, stressed the importance of the hospital.

"Stones River Hospital is a beautiful facility. We have a great cafeteria too," Conley said, pointing to the popularity of the hospital's eatery as a lunch hotspot in Woodbury.

"The hospital is the heart of this community. We have a wonderful, compassionate staff that fills a great need. We are a very important part of the community," she said.

"We aren't Vanderbilt, but be don't want to be Vanderbilt," she added, explaining that Stones River strives to meet Woodbury's needs.

Of particular importance is the Emergency Room that handles an average of 20 patients a day.

Chris Anderson, general manager of Crane Interiors, pointed out that Crane would soon be celebrating its 25th anniversary in Woodbury and are at the point of expanding their business.

"A lot of people don't know we exist," Anderson said. "We are the big white building between the jail and the landfill."

Crane manufactures interiors for four boat lines with Yamaha being the largest and employs 140 people.

Billy Kaufman, CEO of Short Mountain Distillery, told the audience how his business began as a distillery but rapidly emerged as a major tourist attraction.

"We just started in 2012," but now the distillery has grown to produce 50,000 bottles of alcohol annually with 12 employees working two shifts, Kaufman said.

At this point, the distillery's product is sold in only three states, but demand is growing.

"Our expansion plan is to go to a 15,000 square foot building which will allow us to go national and international with distribution," Kaufman said.

Short Mountain Distillery is successful because its product is authentic and produced organically with a moonshiner's heritage.  "We don't cut corners," he said. "We have tireless and dedicated people working for us."

"We are not afraid of work," Daniel said.

That willingness to work is matched with a corporate slogan that "We are good people."

While the core of Huff N Puff's business is in Middle Tennessee, the company's flat-bed trucks deliver goods as far away as Canada and Alaska.

Gary Hancock of DTC traced his company's beginnings as DeKalb Telephone in 1951 with its eight-party lines.

"We are a cooperative … you are a member," Hancock said. DTC was created by local citizens to provide basic phone service to these rural areas of Tennessee at a time none existed.

DTC has managed to continue to grow despite the elimination of government supplements.

"We are the only small cellular company left in Tennessee," he said.