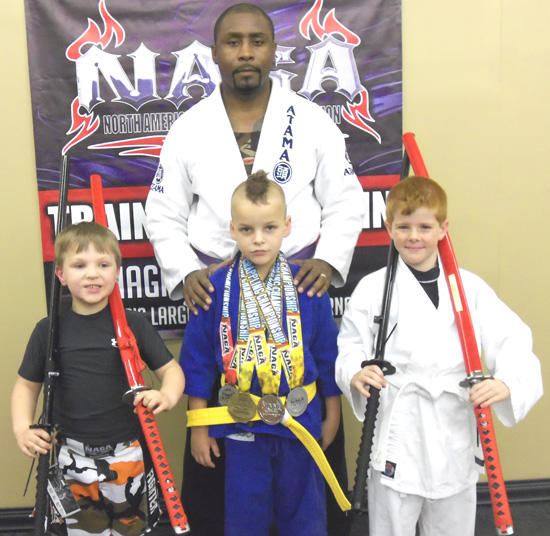 From left, Gavin Franklin (Woodland) won 1st place in Gi and No Gi for Novice 6-year-olds.

Ethan Simon (West Side) won 2nd place in No Gi and Gi for Novice 7-year-olds and won 3rd place for Gi and No Gi for Beginner 7 year olds.

Ethan Duke (West Side) won 1st place in Gi and No Gi Novice for 8 year olds.

Mr. Jimmie Hayes is the owner of CCMA and coached the boys.

According to Wikipedia, Grappling refers to techniques, maneuvers, and counters applied to an opponent in order to gain a physical advantage, such as improving relative position, escaping, submitting, or injury to the opponent.

Grappling is a general term that covers techniques used in many disciplines, styles and martial arts that are practiced both as combat sports and for self defense.

Grappling does not typically include striking or most commonly the use of weapons, however some grappling disciplines teach tactics that include strikes and weapons either alongside grappling or as part of it.

Print
Members Opinions:
heritage
[Delete]
we in cannon county are fortunate to have individuals such as mr. jimmie and wife jessica that take our children under their wing and not only teach them an art - but also discipline and self worth.
thanks also to other studios in woodbury that help keep our youth away from the temptations of todays times.