CASEY HINDMAN, Special to the Courier 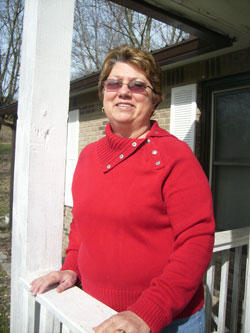 MARY JEAN COOK
Rutherford and Cannon counties have announced their annual Ruthie awards for 2011, and a Cannon County educator has taken the top award in one category.

Mrs. Mary Jean Cook, a 25-year veteran teacher in the Cannon County school system, has been named the 2011 Ruthies "Favorite School Teacher."  Mrs. Mary Jean Cook of Woodland Elementary School was nominated among many outstanding educators, but took the top honor for both Cannon and Rutherford County. She was followed by Cassie Urban of Walter Hill and Julia Barrett of Scales Elementary.

Mrs. Cook has worked for Cannon County schools and the state of Tennessee for a combined 30. She graduated from Cannon County High School, and earned her collegiate degree from Middle Tennessee State University with a Bachelor of Science and Education degree.

She worked for the Department of Human Services for five years and then decided to follow in her mother's footsteps. Mrs. Cooks' mother, Mrs. Eleanor Howell, taught third grade at Woodbury Grammar and encouraged her daughter to join forces with her fellow educators, colleagues and friends at Woodland Elementary.

Mrs. Cook took the advice and has remained at Woodland for the last twenty-five years of service in education. She is currently a seventh grade home room teacher, and teaches English Grammar, Language and Writing to sixth, seventh, and eighth graders at Woodland.

In her 25 years as an educator at Woodland she has influenced numerous students and colleagues through the various roles she has played. Mrs. Cook has taught and reached her students in the classroom. She has encouraged them to reach their greatest potential. She has helped hundreds of students write books and become published authors. She has given advice and guidance to many of her students even after they graduated from her class and moved into collegiate life or pursued jobs after completing school.

Many of her former students speak of her with smiles on their faces, and several actually credit her for steering them down their career paths. Mrs. Cook has also served the role of Junior Beta sponsor at Woodland for 19 years. She has had several elected state officers from Woodland's Beta club over the years, and Hunter Brown was elected National Junior Beta President while he was a member of Woodland School's Junior Beta club under Mrs. Cook's guidance.

For years she has encouraged Beta students to participate in community service events, state and national conventions, and Beta leadership conferences. She has asked prominent business men and women of the community to come into the schools and speak with students about topics ranging from etiquette and job training and interviewing to finding something that they are passionate about and developing it into a career. She is always striving to help her students become more productive members of their school and community.

As an educator and colleague she is devoted to continuing growth and learning in public education and has encouraged other teachers during her years of service. She has served on committees promoting school and community improvement. She has welcomed new educators into her classroom as student teachers and has served as a mentor to many beginning teachers. She has searched out in-service opportunities and college classes that have continued to help her connect with other educators and gain knowledge to share with her students and fellow teachers.

As a member of Cannon County and Tennessee's educators union, she has also negotiated for Cannon County's teachers and worked closely with school Superintendent Mrs. Barbara Parker as President of the Cannon County Education Association and a leader for the CCEA negotiating team.

Outside of the education system Mrs. Mary Jean Cook is also an outstanding person and member of the community. She is loved by her family, church family, neighbors, and friends. She is married to P.J. (Rooster) Cook and is celebrating 33 years of marriage this November. The Cooks' own a farm near Woodbury, and have two children Stephen Cook and Abby Cook Frazor and son-in-law Justin Frazor.

One of Mrs. Cook's favorite parts of the day is talking to her nine-year-old granddaughter, McKenna Grace Powell, during their daily drive to and from Woodland School.

Mrs. Cook and her family are members of and attend the Smith Grove Church of Christ. As she approaches retirement, Mrs. Mary Jean Cook is honored by her Ruthie award and the students who felt that she deserved to be recognized as their "favorite school teacher."  She appreciates those who nominated and voted for her for this award. It has truly touched her heart just as she has touched the lives and hearts of others.

Congratulations Mrs. Cook!  Thank you for being such an inspiration. We love you so very much.

Print
Members Opinions:
Sarah
[Delete]
Jubba and I are so very proud for Mary Jean and her family........
redbird
[Delete]
I am so proud of Mrs.Mary J Cook, I have watched her for the past several years, after moving into the Woodland Area, putting two grandchildren in school at Woodland, one has graduated high school, and one is in the eight grade. Her teaching skills impressed me right away. I love the way she encourages everyone to use correct lanuguage, I know the new texting system is very disappointing for her. She has unknowningly has made my vocabulary better, I watch how I express myself since knowing Mary Jean. I wish we had more caring, compassionate educators as Mrs. Cook. Congratulations, Mrs. Cook.
[Delete]
Congradulations Ms Cook. My children love you and we only wish you the best!!
nasrville
[Delete]
Congratulations to Mrs Cook. I never had the opportunity to have her as a teacher since I went to another school but have known her as a person my entire life and this article is 100% correct! Cannon County is blessed beyond measure to have a teacher/educator like Mary Jean. Her name rings out whenever you hear "Woodland School" mentioned or even "Cannon Co Teachers." Thank you for everything that you have done to set an example for so many. It will be a sad day when she retires and leaves the classroom.