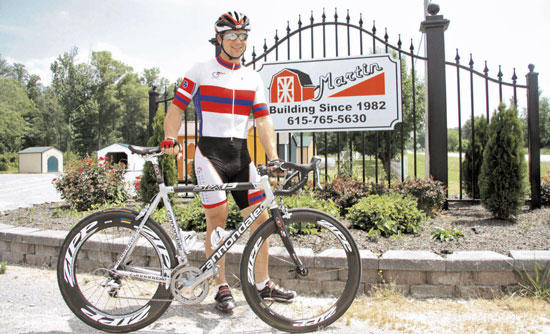 Local cyclist Matthew Russell is a four-time state champion in his sport. The Cannon County native will compete at the National Championship in Augusta, Ga., at the end of June. (TONY STINNETT photo)
One of Cannon County's best-kept secrets is neatly tucked away in the hills of Short Mountain.

Few citizens realize one of Tennessee's premier junior cyclists resides in Cannon County. Matthew Russell may be a bit of an unknown in competitive cycling locally but the 17-year-old is making quite a name for himself throughout the state.

Russell, the son of Lawrence and Loraine Russell, has captured four state championships since he picked up the sport competitively in 2009, including the 2011 State Champion Time Trial State Championship in May. He will compete in the Junior National Tournament in Augusta, Ga., later this month.

Identifying him should not be difficult. State champions receive a special championship jersey and they are the only ones who receive these. Russell has four tucked away.

"I'm hoping to do well at Nationals and maybe get on the National Team," Russell said. "If that happens you race in Europe. My main goal is to be on a development team. If you get on a good development team you are fully sponsored."

Russell is well on his way to earning his spot.

A move into the next age category has not hampered the rising star's rapid success rate in 2011. Not only has Russell already captured a state title, but he also sits atop the BAR Competition Standings with 155 points - 52 more than second-place Paul Galewski.

Not bad for a young man who didn't pick up the sport until 2009.

Sure, but Russell's success has more to do with work ethic, passion and a strong will to be the best.

"I knew when I started doing this I wanted to go full blast, give my best and be on top," Russell said. "I didn't expect to get that high as fast as I have. I figured it would take longer. I believe of alot (of the sudden success) is the competition. If you want to do something it is not much fun if you only half do it. Winning is the fun part and that's what you go for."

Lawrence Russell, who also races competitively, said Matthew is as humble as he is good.

"He says he is surprised at his success but we know how hard he works," Lawrence said. "He is very dedicated to his workouts and schedule. I know it surprises him, but he does work extremely hard at what he does. I'm his biggest cheerleader. Matthew has always been modest about his accomplishments. He doesn't lack confidence but, maybe, he plays it down too much. He does very well."

A general road race is 55 miles and includes thousands of feet of climbing. Time trials are shorter and you are timed on how fast you are individually.

Matthew, who trains daily, says a general workout includes 60-plus miles. He also has gone high-tech in his training through a computerized program with coach Everett Baker.

"I have a coach and a special tap wheel that has a computer in it and that computer downloads everything I do," Matthew said. "I download it on the computer and it sends everything to (Baker). He will send me certain workouts based on what I'm doing and how I progress."

Professionals believe Russell has a bright future in competitive racing and could land on the National Team one day. He just graduated high school and has received interest from Lindsey Wilson College (Ky.) to join their collegiate cycling team on athletic scholarship.

"Coaches have told me (Matthew) has an extreme amount of potential for down the road," Lawrence said. "I do want him to do well in cycling, but I also want him to be realistic and think about a good education. If this sport can lead to that and doing both it would be great. These great cyclists we read about started at a very young age and pushed themselves like Matthew is doing."

Matthew actually was forced into cycling through injury. He initially competed as an upper level gymnast but a shoulder injury put him out of commission.

"Wade Patton comes around a lot and he used to race," Matthew said. "He talked to me about it and showed me videos. I thought it looked pretty cool so I gave it a try."

In the short time that has followed Matthew Russell has blossomed into state's top Junior cyclist.

Matthew Russell is a known commodity throughout the state so take note of this outstanding success story because the next cyclist you pass on the side of the road in Cannon County may very well be a four-time state champion.