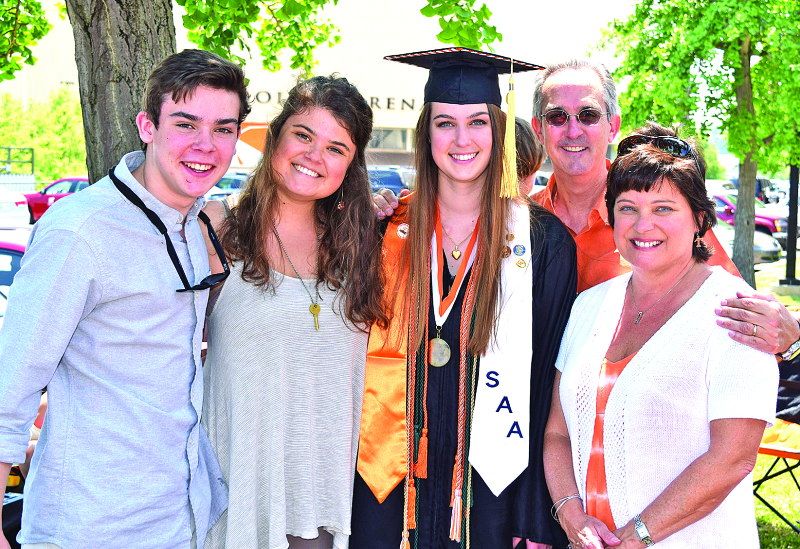 Lisa Patton and her husband Eric celebrate daughter Madeline's May 2015 graduation from the University of Tennessee in Knoxville. Also along for the big day were their children, from left, Eli and Brenna. Photo submitted

After a mostly sunny career with more than her share of stormy nights, WKRN-Channel 2 weather forecaster Lisa Patton is calling it a day.

Last week, the Mt. Juliet native took her final bow in front of the weather map after 25 years with the Nashville station. Her quarter-of-a-century tenure makes her the dean of Music City weatherwomen.

"I guess I've been forecasting weather on TV longer than any female in the Nashville market. It's not easy being a full-time working mom in an industry as visible as television news. It takes a toll. I have tried to give 110 percent to my family and 95 percent at work, but that means stretching myself pretty thin. Every working mom knows all about that," said Patton, the mother of three children: Madeline, 23, Brenna, 20, and Eli, 16.

It seems her decision to walk away from her position as one of Nashville's most beloved on-air personalities came comfortably but with much thought.
"Live television and the news industry are demanding," she stated. "Certainly there are slow days when the weather is quiet, but we have more and more active weather days here in Middle Tennessee when you are always anticipating the next storm or flood or winter event. And then there is the 'always on' feature of social media. Being a working mom is rewarding beyond measure, but while it has been my job to make it look easy, I admit to being a wee bit exhausted. I just decided I needed to make some time for me before I am too old to enjoy it.

"I want to clean up a lot of stacks at home. Maybe sleep through a thunderstorm and wear my pajamas when it snows, and I do hope it snows a lot this winter, and I do mean a lot," she said with a laugh. "I want to make some hot chocolate, watch the kids sled and just have fun."

Patton, 54, began her spell at WKRN as the weekend weather forecaster and three-day-a-week news reporter in July 1991 after receiving a phone call from then-news director Bill Lord, who told her, "I've got a place for you." She responded, "OK, I'm ready."

Looking back, she says she most will miss the camaraderie with her colleagues and longtime friends "like Davis [Nolan] and Anne [Holt] and Bob [Mueller] and so many behind the scenes: Jody [Shoulders], Noel [Edwards], Ken [Wilson], Michael [Dennis], Joe [Gregory], Clare [Gibson]. I will miss seeing them on a daily basis. And I'll really miss the interaction with the viewers, but I'm sure I'll still catch up with them at church and the grocery and the Wilson County Fair."

Although she was born in Coos Bay, Ore., where her father was stationed in the Air Force, her roots go deep in the southeastern section of Wilson County. Her dad's side of the family comes from Watertown and her mother's side hails from Statesville.

"I spent lot of time there, not just visiting but working. I grew up part of a farming family. I did a lot of working, cutting, raking and baling hay. My father grew tobacco, and I would pull slips out of the beds and plant them. I was one of the fastest planters of tobacco and tomato slips. I kind of grew up with my feet in the dirt," said Patton, who at 12 could drive a tractor like a pro.

After graduating from Mt. Juliet High School, she enrolled at the University of Tennessee.

"I really thought when I was in college that I was interested in being a sportscaster," she recalled. "The television industry is very competitive to get into. The weather door opened, so I went in. I just had a niche for it. It's kind of like working a puzzle every day, a challenge. It's fun. Weather was the right fit . . . and I seem to have the gift of gab, and since weathercasting is unscripted, that helps."

It was just as she was completing her communications degree in 1984 that Knoxville TV station WTVK called and offered her a job.

"They told me, 'We have this weekend weather spot and would like for you to come audition for it.' . . . I told them, 'I don't know anything about weather.' They said, 'OK, we'll teach you.' I began learning weather forecasting on the job. Back then there were not as many meteorologists for news directors to choose from, so to rip and read was fairly common," she said, referring to the practice of reading the local forecast as it came off the wires from the National Weather Service.

"Fortunately, mets like my dear friend, Davis Nolan, have taught me so much. I have been building my own forecasts now for 20-plus years. And, gosh, sometimes I still don't get it right."

With four years at Knoxville radio and TV behind her belt, Patton landed another four-year gig at WTVD in Raleigh-Durham, N.C., as a weekend weather anchor and news reporter. There she met husband-to-be, Eric, a director at the TV station, and after a three-year courtship, they married and moved to Middle Tennessee where they started their family on Wilson County's west side, and Patton began winning the loyalty of her viewers.

During her tenure at WKRN, Patton won Emmy Awards for tornado coverage in 2006 and 2008 and was named best TV weather anchor in 2013 by the Tennessee Associated Press.

Along the sunny, stormy, rainy, icy, sweltering, freezing and sometimes partly cloudy way, she reminisces on a few of her most unforgettable weather events.

"Most memorable was the tornado of April 16, 1998. Stormtracker was fairly new then. We could see the debris flying around on our City Cam. I realized then what an awesome responsibility it was to try and keep folks safe during threatening times. I would say the floods of 2010 were the most emotional event for me," said Patton. "It was overwhelming to see so many neighbors devastated by the rising water.

"And one of the most challenging days was when we hit our all-time record high of 109 degrees on June 29, 2012. At about 10 minutes 'til four, I had the weather graphics done when suddenly every computer system in the station shut down except the weather computers. So we went on-air with our newscasts with nothing but weather. I talked about that 109 degrees for about an hour and a half. There was no video for news stories. We finally got some reporters to do live shots about the heat, but that was a real song and dance."

As for her career highlight, she thinks back to a 1992 tour of the Navy aircraft carrier USS John F. Kennedy.

"It was amazing to see how dangerous the work is on an aircraft carrier," she said. "I felt a little guilty because most of those sailors never got to experience what I did. We flew in and did a tailhook landing and then experienced a catapult launch. That was pretty exciting stuff. As a matter of fact, I thought I was in heaven for a few seconds. I guess we experienced zero gravity for just a moment after take-off, and I just couldn't feel anything. Video journalist Rich Stone assured me we were still very much alive."

So what is next for the budding lady of leisure?

"I want to organize my life. It got a little disheveled over the years. I want to relax a little, have a bit more laidback lifestyle for a while. I want to maybe grow roses again or herbs. Just get my hands back in the dirt again. I'm actually quite domestic--I like to cook, sew, craft, garden, even clean.

"While I do plan to rest and relax around enjoying some of my favorite hobbies, I'm a doer, so I imagine I will get my finger into some pot or two or three or 10."

While she has given up on a few things that were on her bucket list, like watching a space shuttle launch, she clings to one. "I'd really like to see the Northern Lights," she confessed.

Asked what she enjoyed most about talking about the weather, she shared, "Just helping people out with their daily lives. Many people consider me family because I'm in their living room every day. A lot of people have sent emails, cards and Facebook posts saying they were gonna miss me. I'm gonna miss them, too."

So might she consider coming back to weather forecasting somewhere down the road?

Nashville's most weather-wise woman predicted, "I might fill in from time to time. Who knows? Never say never!"