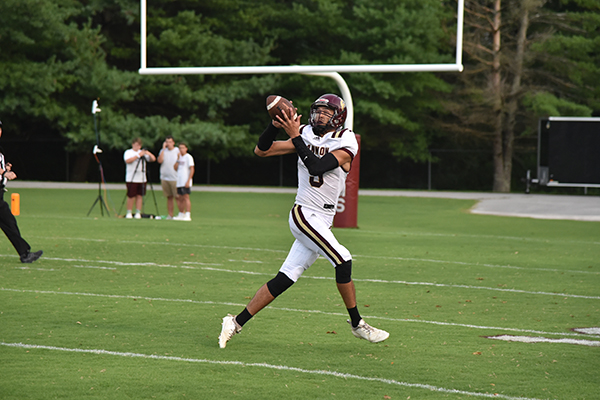 Wade Love (3) was on the receiving end of a 52-yard touchdown pass from Jamal Barrett on the opening drive at White County Friday. (Photo by Ronny Burks)

That's what the Cannon County Lions defense will be attempting to do this coming in their matchup against Class 6A foe and neighbor Warren County.

First-year head Pioneer coach Matt Turner has the speedsters to run his Pistol-T offense to perfection. The Lions will have to try to stop them.

Cannon County gave up 271 yards of total offense in Friday's loss to White County. They will have to do a much better job if they hope to get a home win against a team that only won two games last season but came out of the gates strong, beating DeKalb County in Friday's Week 1 action 35-21.

CJ Taylor is the weapon the Lions have to be most worried about. Taylor rushed for over 100 yards in two preseason scrimmages.

The Lions must cut down on turnovers, while creating turnovers from the Warren County side. There were several by the Pioneers in McMinnville last Friday although DeKalb could not capitalize.

Even though there were a couple of miscues from Cannon, two of them were on fourth down plays which cost the Lions the opportunity to score.

Friday night's game will start at 7:00 at Fred Schwartz Field.