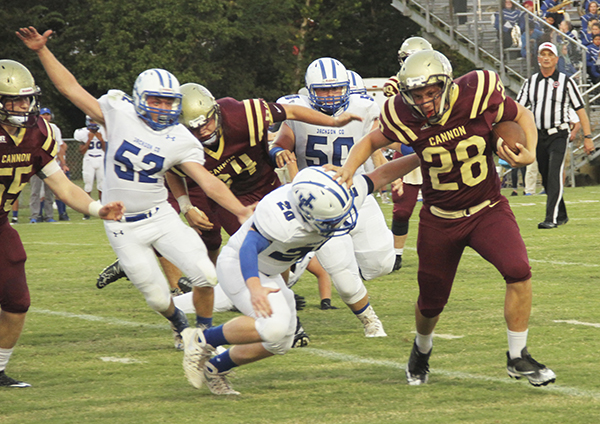 Cannon County's Brady Cunningham (28) fighs off a Jackson County defender on his way to a 15-yard run Friday night during the Lions' home opener. (Ronny Burks photo)
For two consecutive weeks, the Cannon County Lions football team lost a fumble on their first possession of the second half.
The week before last, the fumble occurred on an ensuing kickoff after Red Boiling Springs scored to open the third period.
Last week against Jackson County, it was on the opening drive of the quarter deep in Blue Devil territory on the first play from scrimmage and unfortunately it led to a Jackson County go-ahead score as the Blue Devils would hang on to win in a 20-19 thriller.
The Lions started off the game, their home opener at Fred Schwartz Field on Friday night , the way they wanted to. Defensively they held Jackson County to a four-down-and-out opening series and then offensively put together a 10-play, 70-yard drive that ended with junior running back Cort Litchford scoring from seven yards away to get out of the gates on top 7-0.
From there things looked good until the Blue Devils were able to tie it up thanks to a screen pass that netted them 33 yards and got the team from Gainesboro to the 3 yard line.
Starting the second quarter, Jackson quarterback Wid Robbins took the quarterback keeper into the end zone and tied it up 7-7.
The teams traded turnovers from there and defensively held each other out of the end zone until the second half.
The Lions got the ball to start the second half. With the ball deep in their own territory at the four yard line, Litchford fumbled, giving way to a Blue Devil recovery at the 11. Three plays later, Jordan Whitehead punched the go ahead score in from the 5-yard line and Jackson County took a 14-7 lead.
With the momentum swinging Jackson County's way, their defense held the Lions to a four-down series. That's when the Blue Devils struck next. After a facemask penalty on the first play from the line of scrimmage on their next offensive possession, the Blue Devils got the ball on the Lion 28.
Three plays later Robbins would score again from 6 yards out; however, Cannon County was able to block the extra point. Jackson led by two scores with the game still in the third quarter, 20-7.
The Lions put together an impressive drive right after to answer Jackson County. Starting at their own 35, 10 plays was all they needed to get into the end zone as Michael Lockhart found paydirt the only time he carried the football, from 14 yards out, on a reverse. The Lions couldn't convert the extra point and trailed by a touchdown 20-13.
The two teams went back to keeping each other honest defensively until the thrilling final drive to end the game.
Cannon County held Jackson to a four-down series, survived a field goal attempt that went wide to the right, and then it was their turn.
With 3:31 left to go in the game, the Lions started the drive at their own 46. Litchford got the call and responded with 39 yards on three carries to get the Lions inside the red zone at the 20.
A pass interference call against Jackson County placed the ball at the Blue Devil 8-yard line for a first and goal situation. The Blue Devils held Cannon County out of the end zone on the first two efforts.
With third-and-goal looming, Cannon County pulled off a perfectly executed play-action pass with quarterback Charlie Parrish hooking up with wide receiver Ty St. John for the 8 yards needed to pull within one with 31 seconds left to go.
The Lions decided to go for the potential game-winning, two-point conversion. The Blue Devils were able to deny that conversion, recover the ensuing onside kick and run out the clock for the win.
Cannon County's offense gathered a much bigger 234 total yards compared to 150 for Jackson. Parrish finished the game 6-for-13 for 46 yards with one TD and 1 interception.
Cort Litchford again did most of the work from the backfield, carrying the ball 29 times for 131 yards.
The Lions will lace up the cleats Thursday night when they meet Region foe Sequatchie County in Woodbury at 7:00.